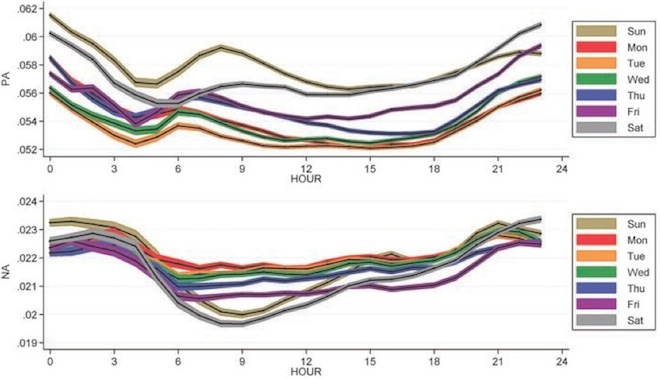 An analysis of mood patterns distilled from half a billion tweets has produced a civilization-scale picture of how moods rise and fall in tandem, over time and across the world.

The details seem intuitive: positive feelings peaking in the morning, dipping during work and rising at day’s end; negativity accumulated over the workweek dissipating late on Friday afternoon. But they’ve proved surprisingly tricky to measure.

“There’s a whole generation of lab work that’s been inconclusive,” said sociologist Scott Golder of Cornell University, co-author of the tweet analysis published Sept. 29 in Science. “Every study would have something different to say about what they saw in their subjects’ affective rhythms.”

Many studies of how moods — or, more technically, positive and negative affect — change from minute to minute and day to day rely on self-reported surveys, which can be inconsistent if not misleading. The subjects of these studies also tend to be undergraduate students from western colleges, a group that’s not always representative of humanity at large.

'A systematic daily pattern of positive mood is a fundamental part of human existence.'

Twitter users, of course, don’t represent humanity either. But the culture- and globe-spanning size of the software platform’s community, and their constant generation of data that can be cross-referenced and correlated and otherwise computationally investigated, make them alluring to researchers.

“Twitter and Facebook, market transactions on eBay and Amazon: This is the stuff of everyday life” for much of the world, said Golder. “For a social scientist to have access to these records is a fantastic new opportunity.”

The resulting trends — positive moods starting high in the morning and declining through the day, peaking overall on weekends — held steady around the world.

Though the proposition that mood is governed by circadian and sleep cycles is widely accepted, other studies of mood fluctuations have found varying patterns, especially for positivity: A single afternoon peak, a day-long plateau, dual peaks at noon and evening or afternoon and evening, a mid-afternoon dip. Those discrepancies may be based largely on factors eliminated by the new study.

“The findings are exciting, particularly the robustness of the daily patterns in positive affect across vastly different geographical areas and cultures,” said Brant Hasler, a psychologist at the University of Pittsburgh School of Medicine. “A systematic daily pattern of positive mood is a fundamental part of human existence.”

However, said Hasler, “One must be very careful in extrapolating emotional state from a highly specific form of communication like Twitter.” People often present themselves strategically, and periods of especially intense emotion might be over- or under-represented.

The 140-character format itself might also be misleading, reducing the use of adjectives that would give more nuanced indicators of emotional tone, Hasler said.

According to Golder, analysis of crowd-generated datasets isn’t intended to replace other methodologies, but to complement them, providing yet one more way of investigating social patterns. Until recently, “there hasn’t been any practical way to observe large numbers of people in fine-grained detail,” he said.

“I applaud the creativity of the authors’ methods, and the ambitious scope of their sample,” said Hasler. “Now, we need to address two questions that follow from this: Why do these daily patterns exist? And how can we use this knowledge to improve our own lives and those of others?”

Read 2229 times
Published in News Technologique-Tech News
More in this category: « Mercury's Explosive Volcanic History Revealed Amazon's Android Tablet May Be the Best and Kill the Rest »
back to top