China Set to Launch Its Own Space Station; Mission: Unknown 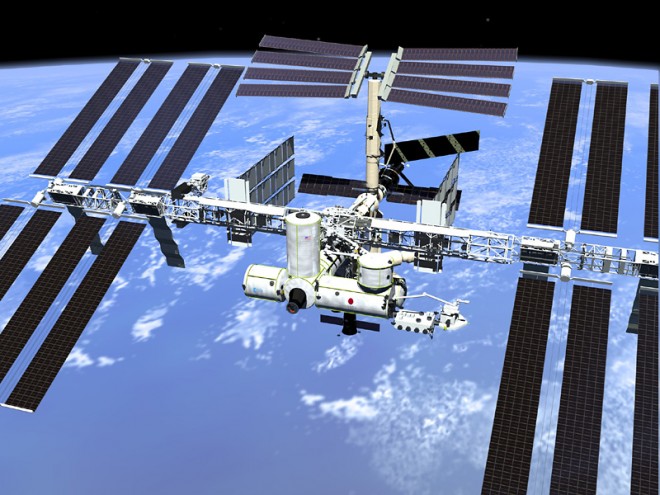 China is just days away from launching an ambitious rival to the International Space Station, pictured above. A rocket launch carrying an unmanned test module named Tiangong 1 — literally, “Heavenly Palace 1” — is scheduled for this week. Allegedly, the 8.5-ton Tiangong 1 module is designed to practice autonomous rendezvous ops in orbit, in order to prep for a manned space base around 2020. But China-watchers and space specialists are trying to figure out if there’s an additional agenda for the Heavenly Palace.

Will it be a spacelab equipped strictly for scientific research? Is there a military mission? Is it a jobs program for China’s “large, young, highly motivated and growing population of space scientists and engineers?” (That’s how Gregory Kulacki, from the Union of Concerned Scientists, describes China’s space workforce.) Is the whole space-station program really just a PR ploy? Or some or all of the above?

The short answer is, we don’t know. The “opacity” of this and Beijing’s other space initiatives “should raise questions about Chinese intentions,” Dean Cheng, an analyst with the hawkish Heritage Foundation, tells Danger Room. One thing is for sure: Beijing has been awfully busy in space, with more and more satellite launches plus occasional spacewalks and even plans for a putting a man on the moon by 2030.

Jeffrey Wasserstrom, a University of California professor and author of China in the 21st Century, has a theory about Beijing’s obsession with spectacle, whether a massive engineering project, the Olympics or the theatrical unveiling of a new stealth-fighter prototype. Spectacles “play a role in confirming a vision, based partly in official myth but also in tangible reality, that China is a once-powerful country that was laid low for a time and has now risen again to a more natural status,” Wasserstrom wrote.

But that doesn’t necessarily mean Beijing intends to start a new space race against the U.S., which recently announced plans for new, gigantic rockets and a possible manned mission to an asteroid or even Mars. “China’s progress is steady but slow,” Cheng says. “Manned launches every other year hardly suggests a space-race mentality. At the same time, however, these are steady improvements, from a single man to two-man to three-man. The Tiangong spacelab … will mark another step forwards for China’s manned space program.”

Read 4564 times
Published in News Technologique-Tech News
More in this category: « Amazon's Android Tablet May Be the Best and Kill the Rest Un tutorial pour embêter Facebook en 4 étapes »
back to top