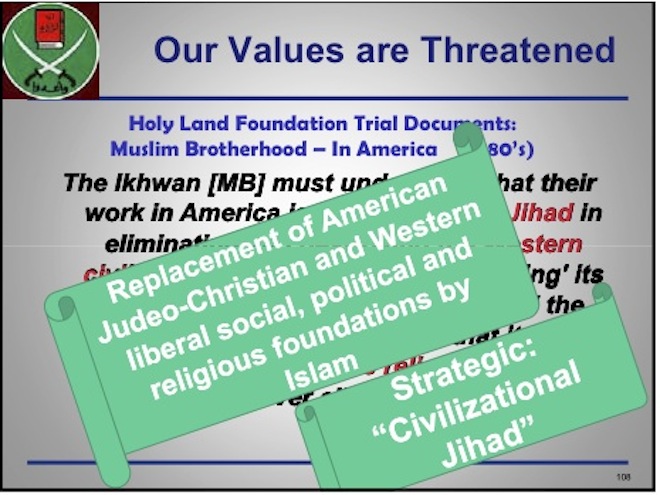 FBI intelligence analysts weren’t the only ones teaching their colleagues that the U.S. is at war with the Islamic religion. Justice Department officials — and even teachers at the Army’s top intellectual center — are delivering similar messages.

Danger Room has acquired a 2010 PowerPoint presentation compiled by an intelligence analyst working for the U.S. Attorney in the Middle District of Pennsylvania. Reminiscent of FBI training materials exposed by Danger Room in September, the PowerPoint warns of a “Civilizational Jihad” stretching back from the dawn of Islam and waged today in the U.S. by “civilians, juries, lawyers, media, academia and charities” who threaten “our values.” The goal of that war: “Replacement of American Judeo-Christian and Western liberal social, political and religious foundations by Islam.”

When Danger Room questioned the Justice Department about the briefing, it issued a statement pledging to join the FBI in scrubbing its counterterrorism training for signs of material that equate average Muslims with terrorists.

But the Justice Department is hardly alone in hosting bigoted and counterproductive counterterrorism training. Even if federal prosecutors and FBI agents no longer go through such instruction, Danger Room has learned that anti-Islam training material has spread into the military. Some of the Islamophobic presenters hired by the FBI also lecture at premiere schools for military intelligence; at an online university favored by students seeking jobs in U.S. intelligence agencies and with affiliated contractors; and even at the Army’s intellectual center, Fort Leavenworth.

In other words, what the FBI once told Danger Room was an isolated incident — occurring one time in one lecture session — has spread throughout numerous government agencies over the years.

And in addition to being dubious as a matter of civil rights, experts say that the training places U.S. counterterrorism efforts at risk. “Boneheaded is a generous way to describe this training,” says counterterrorism analyst Jarret Brachman, author of Global Jihadism: Theory and Practice. “I’d lean more towards hateful, paranoid and completely counterproductive.”

Read 3412 times
Published in News Technologique-Tech News
More in this category: « Lost Worlds Survive in Living Fossils Arcade Brawlers Slug It Out on iPhone »
back to top