Arcade Brawlers Slug It Out on iPhone 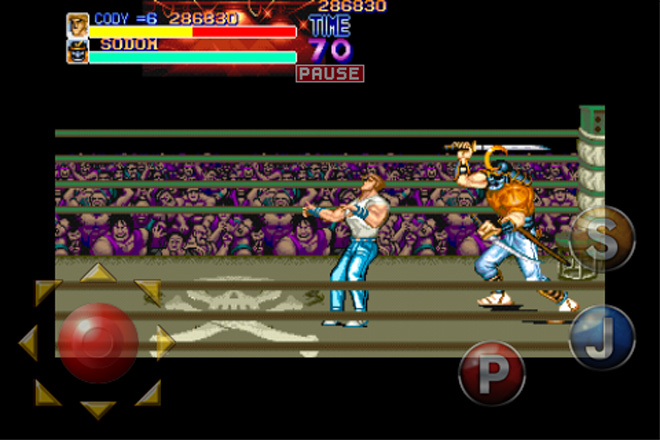 The iPhone versions of Final Fight and other brawling games use virtual joysticks instead of buttons.
Screengrab: Wired.com

Two weeks ago, Capcom released an iPhone version of its classic brawling game Final Fight. Sharp-eyed observers of the iTunes store would note that Apple’s device now has the complete library of essential beat-em-up games, since it also has versions of Streets of Rage and Double Dragon.

For a brief historical moment, in the golden age of the video arcade, games in which you and a friend played street toughs who walked to the right and punched everything that wasn’t part of the background comprised one of the most popular genres of game. They were built for eating quarters, because every time you bit the dust you could pay to see what dangers were around the next corner.

Right now you’re probably thinking what I was: There’s no way these games would work on the iPhone. Final Fight and its ilk were built for joysticks and buttons, and iPhone ports of old games that have to use on-screen “virtual pads” are always too clumsy to work. Old games were designed under the assumption that players were using 100% accurate controls, not mushy, clumsy buttons drawn on iPhone screens.

But here’s the thing with brawlers: They don’t require pixel-perfect inputs. All you need to do is roughly align your ambulant pugilist with a human punching bag, then let loose on him. I found I was actually having fun with Final Fight, so I decided to grab the other two and compare the ways that each iPhone port was handled.

Capcom’s classic tale of three men on a quest to clean up their city’s infestation of roving gangs and save the mayor’s daughter is presented here exactly as it was in the arcades, although the image of said daughter tied up in her underwear has been removed from the game’s intro.

The first thing you’ll notice is that by simply holding down the “punch” button, your character of choice will fire off jabs in rapid succession. No need to slam your thumb against the iPhone’s screen. This is a good compromise for an unsolvable problem; Final Fight is such a fast game that it would be ridiculous to ask the player to hit his iPhone screen so quickly. This also breaks the game a little, but in a way that benefits the player.

In fact, Final Fight seems to have been designed around the idea that all conflicts should be resolved in a way that benefits the player. The original arcade game was supposed to make you die early and often to get more quarters out of you. So the iPhone version lets you continue as often as you like. And if that’s too much of a hassle, you can choose to start with a very generous 9 lives at the game’s outset. You can even crank up the damage that your super moves deal out, to make things easier.

The only thing that seems especially half-assed about this port is the unlockable pieces of digital artwork. Instead of tying these rewards to special moments in the game or unique challenges, you receive them for just playing the game a certain number of times, or reaching certain high scores. What about a photo of the Andore family for defeating U. Andore and G. Andore without dying? See, I just came up with a better idea in five seconds. 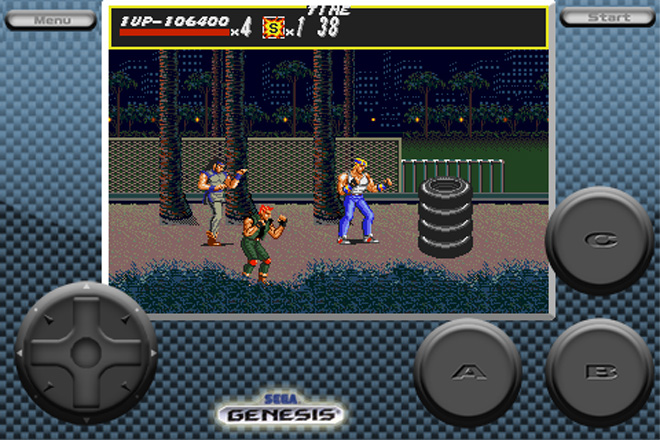 Streets of Rage and other Sega Genesis games have been ported to iPhone with similar control schemes that echo the classic game system's joypad design.
Screengrab: Wired.com

This is the series of brawlers that Sega Genesis fans had to play because the Final Fight series was mostly exclusive to the Super Nintendo. But do not feel too bad for them, because this was an excellent game in its own right, not least because of the awesome Yuzo Koshiro (Actraiser) soundtrack.

The iPhone version of Streets of Rage does not offer the bells and whistles of Final Fight, in terms of allowing you to cheat at the game. There’s no rapid-fire option here, although since this is a slower-paced game that’s a lot less of an issue.

It does, however, offer an Accelerometer mode that lets you walk around by tilting your device. This, again, works better than you’d think, with a simple calibration procedure that you can access while you’re playing a game (although it’s buried a few too many menu layers deep).

That said, I prefer to just use the on-screen D-pad, even though my thumb does cover up a lot of the gameplay area. Both this and Final Fight do allow you to

On that note, Sega has converted many Genesis games to the iPhone (including the two Streets of Rage sequels), but to keep them consistently branded it uses the generic Genesis A, B and C buttons as the on-screen inputs. The other two games label the buttons with their actual functions (Punch, Jump, etc.), which makes much more sense on iPhone. 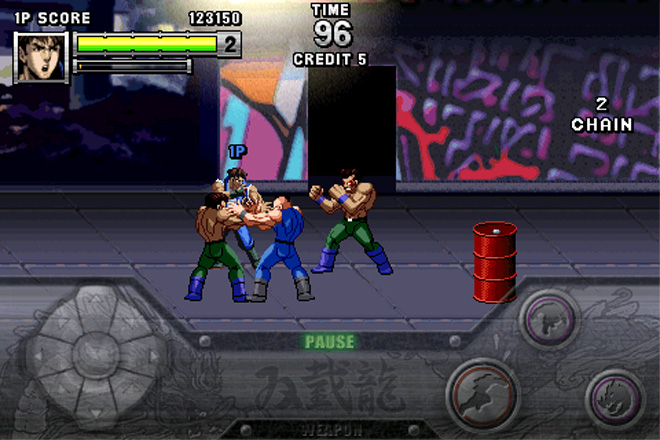 Double Dragon for iPhone is a full remake, not a port of the arcade classic.
Screengrab: Wired.com

To my chagrin, this isn’t an enhanced port of the classic arcade game. Rather, it’s a totally new game designed for iPhone based on the original. This has its advantages, since the designers could design around the iPhone’s limitations rather than try to cram a pre-existing game into it.

Of course, the disadvantage is that it loses all of the nostalgia factor. I’m motivated to push through the re-learning curve of touch controls because I like experiencing the classic Final Fight and Streets of Rage. With iPhone Double Dragon you get something that vaguely looks and sounds like the original, but isn’t. I like that they remixed the original music, for example, but would rather listen to the original chiptunes.

The game itself has been thoroughly overhauled; the fighting moves are much more over-the-top, there’s a Limit Break function where you go berserk for a while after you’ve dealt a lot of damage, and there’s a wide variety of hidden techniques.

There are also event scenes, in which we finally get to see protagonists Billy and Jimmy exchange verbal blows with classic characters like the musclebound Abobo. What do they say to each other, while they’re exchanging punches to the face? Apparently they tell bad jokes. Also everything is misspelled (Billy’s girlfriend is not named “Marain,” guys).

Designing the game for iPhone means that there’s a much better balance between the on-screen controls and the gameplay area; the fighting all takes place above where your thumbs sit, so you don’t have to make the choice between obscuring the screen and making the play area smaller.

All that said, the game isn’t quite good enough to make up for the fact that what I’d really rather have is the original arcade Double Dragon. In that sense, Final Fight and Streets of Rage are more to my taste.