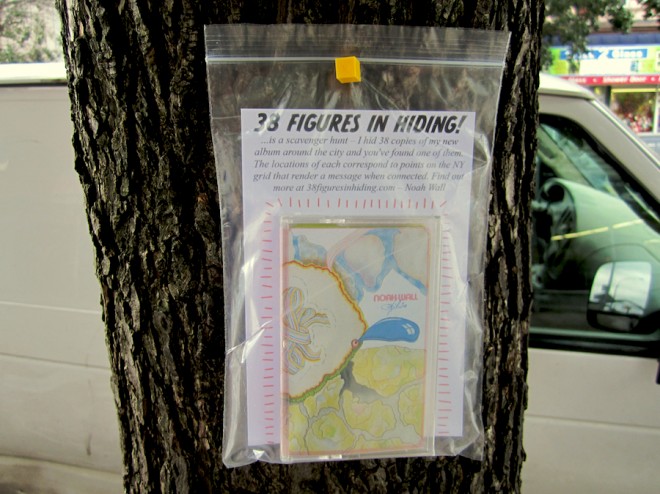 Not too long ago, electronic music artist Noah Wall decided he needed to do something more creative to commemorate the release of his new album than just throwing it up on Bandcamp and iTunes. His novel solution: Hide copies of Hèloïse around New York City and kick off a Google Maps-fueled scavenger hunt.

The electronic musician hid copies of the album all over Manhattan on Thursday in a pattern that, when viewed on the map below, spelled out the record’s name: Hèloïse (also the name of Wall’s late mother, to whom the recording is dedicated).

“A scavenger hunt seemed like a good way to distribute the music to both unsuspecting passers-by and people who had accessed the website/map I made for the project,” Wall told Wired.com in an email.

Beginning at 5:30 a.m. Thursday, Wall hit the streets to hide 38 copies of the album on vinyl and cassette from West 48th Street to East 96th Street. He estimated that if the placement of each album took about 10 minutes, he would be done with his task in less than seven hours.

The campaign, inspired by John Baldessari’s California Map Project, is a very clever way to use the web to get people to go out into the world in search of Wall’s music.

Check out Hèloïse in the Bandcamp player above and find out more about Wall’s 38 Figures in Hiding scavenger hunt on the project’s website. Manhattanites, you’ll need to hit the streets soon if you want to find one of Wall’s records before they’ve all been hunted down.

View 38 FIGURES IN HIDING! in a larger map