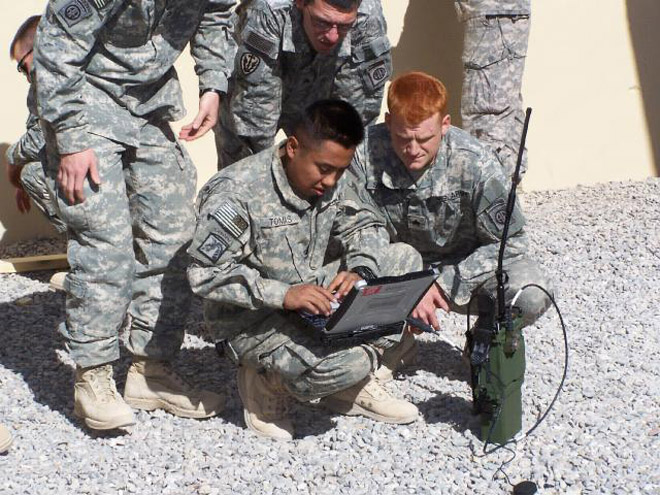 It’s been four and a half years since Steve Jobs unveiled the first iPhone. Since then, the Jesus Phone and its competitors have penetrated every social stratum — with one exception: the Department of Defense. “Historically, we have not been good at fielding things quickly,” Maj. John McGee told Danger Room at the Association of the United States Army’s annual conference in Washington, D.C. The hardware isn’t the problem — I’ve seen dozens of ruggedized tablets and smart devices at the conference today. The issue is the network. One defense contractor, the Harris Corporation, says it may have an answer.

When you and I walk around in New York, Los Angeles, or even Kabul, we are surrounded by a matrix of cellular towers, which makes it very easy to use our iPhones and Androids. But the U.S. military can’t count on having that sort of infrastructure on its next battlefield.

Harris currently has two portable devices in the field that are capable of establishing a network that could help troops communicate, anyway. The Falcon III AN/PRC-152A handheld radio and the AN/PRC-117G manpack and vehicular radio  can latch onto all different kinds of waveforms and networks. (AN/PRC, if you’re wondering, stands for Army/Navy Portable Radio used for two-way Communication.)

If these were commercial devices, they’d connect to 3G, 4G, or WiFi networks within range, allowing smart devices to then connect with each other using the hotspot as a fulcrum. Instead, Harris’ devices primarily connect to established military radio waveforms such as Soldier Radio Waveform, Wideband Networking Waveform, and Adaptive Networking Waveform. So far, the AN/PRC-117G and AN/PRC-152A have primarily been connected to Panasonic Toughbooks with a USB cord, and used to transmit operations commands, tactical strategies, maps, and live video.

But enough stats and specs — Maj. McGee explained how these radios work might work in a battlefield situation while showing me around the tactical radio communications booth. Let’s say there’s an Army unit tucked away in a remote valley. They have portable satellite towers and radios, but the surrounding mountains block the signals. If they have an interoperational radio like the AN/PRC-117G, the unit can use it to communicate, or “hop,” to another radio within their line of sight. Theoretically, the U.S. Military could communicate all around the globe so long as there are enough radios to circumscribe it and each radio is within the line of sight of the next (like a giant game of telephone with Styrofoam cups tethered together by yarn). But it is impractical and sometimes impossible to try to establish a line of communication out of every remote valley. So what now?

Harris and the Joint Tactical Radio System (JTRS, pronounced “jitters”), a Department of Defense program that oversees and evaluates the development of radio networks, are taking to the air. JTRS has already put AN/PRC-117Gs in Persistent Ground Surveillance System blimps, Shadow drones, and a variety of other rotary and fixed-wing aircraft, to create a network in the sky, says retired Maj. Gen. Dennis Moran, a Harris executive. This should allow the isolated unit’s multiband radio to hop over the mountain and connect with a radio on more favorable terrain.

Emphasis on should. Right now, a fully integrated, wireless network appears to be a long way off. One major factor, as always, is price. According to Bloomberg Businessweek, AN/PRC-117Gs sell for $30,000 apiece. With rumors of budget cuts in the defense sector rising daily, it seems unlikely that the Department of Defense will splurge on a radio for every vehicle and soldier (though the AN/PRC-152 is considerably cheaper) anytime soon.

Progress is being made slowly but surely — just the way the Pentagon likes it. JTRS’s second bi-annual Network Integration Evaluation will begin on Oct. 21 and run until Nov. 19. Nearly 50 networking systems will be tested in hopes of bolstering the existing wireless infrastructure. All I can say is, at least they’re being thorough.