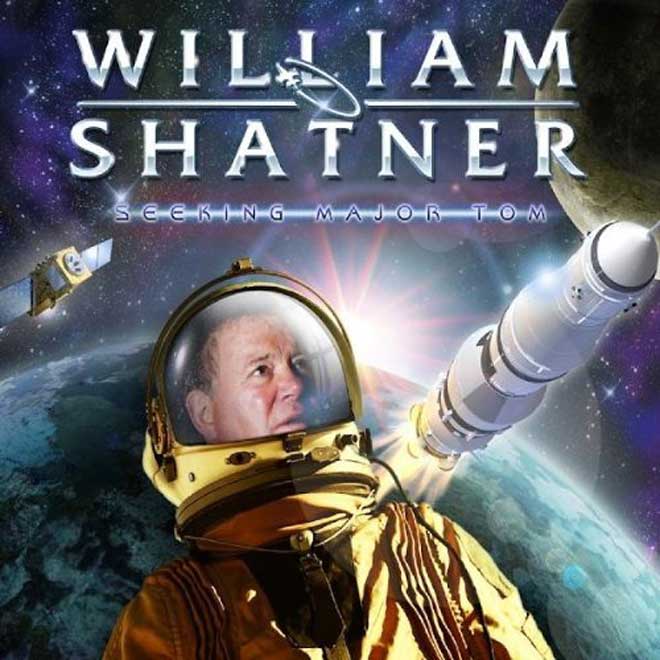 On his new album Seeking Major Tom, William Shatner sing-talks his way through some of rock ‘n’ roll’s most famous space-themed songs.

Released Tuesday, the record features covers of tunes by everyone from Deep Purple to Black Sabbath (yes, “Iron Man”), as well as the track that started it all — David Bowie’s “Space Oddity.”

The concept album was spawned from the ashes of an attempt to produce a broader sci-fi-themed record, a project Shatner turned down. The Star Trek star was throwing out lyric sheets for that album when he saw a pattern.

“I began to see a connection that I had never thought of before,” Shatner says in a promotional documentary for Seeking Major Tom. “The connection was that a half a dozen songs have been written about Major Tom, starting with the David Bowie song. Every song has an element in it that spoke to me about what Major Tom was doing.”

From that kernel of an idea, he went on to record very Shatner-esque versions of tracks like Thomas Dolby’s “She Blinded Me With Science” and Elton John’s “Rocket Man.” But the most ambitious tune on Seeking Major Tom is Shatner’s cover of Queen’s “Bohemian Rhapsody.”

“The scene [in 'Bohemian Rhapsody'] is a six-minute scene of a guy about to leave — now what this has to do with Major Tom is somewhat elusive,” Shatner said. “But it’s a space opera unit in a space opera.”

Check out Shatner’s Seeking Major Tom on iTunes and see him talk about making the album below.