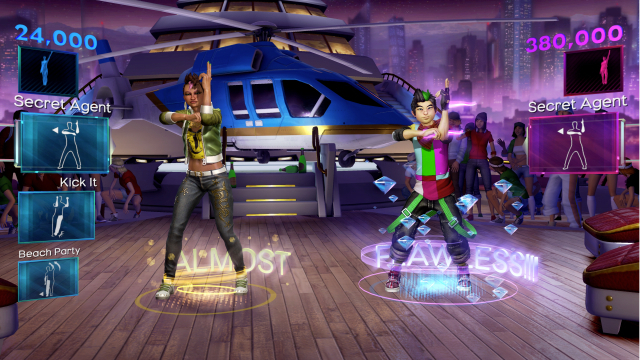 Frenchy Hernandez has been dancing her entire life. She started when she was 2 years old, before eventually studying dance at school, teaching dance, and working for the likes of MTV, BET, VH1, and artists like Ashanti and Snoop Dogg. But for the past two years she’s worked at a video game studio, serving as one of the resident choreographers at Harmonix, the developer behind the upcoming Dance Central 2.

There’s a good chance that those moves you’re busting while dancing in front of your Kinect are actually Frenchy’s moves.

It’s a unique position to be in. Aside from the other resident choreographers at Harmonix, Hernandez is likely the only professional dancer with such extensive game development experience. Though she still teaches, she is a full-time employee at the studio, working exclusively on the Dance Central series alongside her fellow choreographers.

So what exactly does she do?

Well, it depends. The choreographer’s job varies depending on what stage the game is in. Early on in the project she works with the animators and designers to come up with ideas for the various in-game characters, ensuring that they’re authentic. “Just kind of telling them what we wear, how important sneakers [are] to our fashion,” Hernandez told Ars. “You know, helping them find references for the characters that they already had an idea for.”

From there it goes to the song selection, as the choreographers work with the audio team to help “scrunch up songs and make them smaller.” And once the songs are ready it’s time to create the actual dances.

Senior producer Naoko Takamoto decides which choreographer the song fits with best, based on things like their personality or personal musical preferences, and then provides a few notes on how the dance should feel, at which point the choreographer gets to work. In Hernandez’s case, she remains at her desk and listens to the cut of the song for a few days, though she doesn’t exactly stay still.

“Like I sit at my desk and I’m listening to it and just moving around in my chair listening to it,” she explained. “And from there I kind of get up and move to a mirror and just freestyle dance.”

As she dances in front of the mirror, Hernandez begins to pick out specific moves she likes, and where exactly they fit in the song. Part of the actual choreography process is ensuring those moves come in at just the right beat or lyric. Once that’s all set, the fully choreographed dance is filmed and Hernandez and her producer refine it—starting with the expert-level dance before moving on to medium and beginner—and set to naming the individual moves, and determining which ones fit with which difficulty level.

Then it’s on to the motion-capture suits.

It’s a long and involved process, though—aside from a few technical limitations—the actual choreography isn’t that different from what Hernandez would be doing if she were working with an artist or teaching a class.

“It’s really true to form,” she told Ars. “This is the stuff that I would come up with if I was teaching dance or something like that.”

Those technical limitations have been reduced as Microsoft continues to improve the Kinect experience, but some still remain. The camera can’t recognize hand motions done in front of the body, for instance, and dancers can’t move more than five feet to the left or right of the Kinect. The upcoming sequel introduces some new elements to the game, including the ability for two players to be on screen dancing simultaneously. Though these types of features improve the game experience, they haven’t actually changed the choreographer’s job all that much. But they have provided an extra incentive to make the dances even better.

“It actually inspires us,” Hernandez told Ars, “because it makes it really look like real dancing when you have two dancers on the screen doing two different things.”