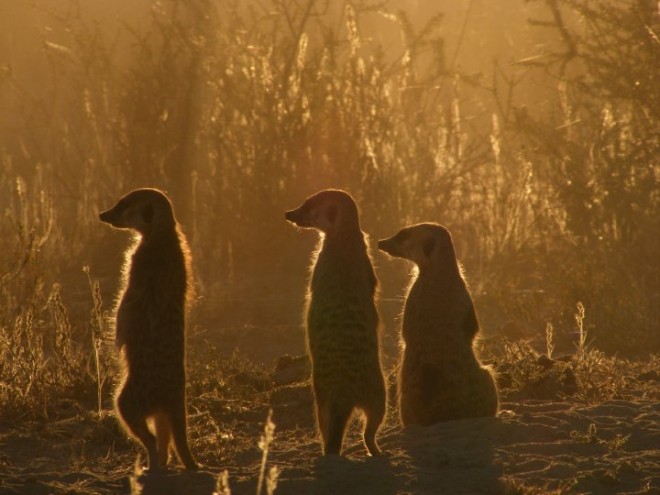 By using audio trickery to present meerkats with a puzzling situation, biologists have demonstrated that the adorable African critters recognize each other by voice.

The findings are based on tests in which calls from the same individual were played near-simultaneously in two different locations. The implications go beyond meerkats.

Humans and many primates clearly recognize individual voices, a capacity considered fundamental for rich social lives. Some mammals, such as dolphins, have demonstrated the ability in captive settings. But while recognizing voices seems obvious — how else could Meerkat Manor make sense? — it’s been surprisingly difficult to design quantitative studies for truly wild animals other than primates, leaving an important aspect of animal social life in empirical shadow.

“Understanding how animals experience the individuals within their social worlds is key to deciphering the evolution of social and communicative capacities,” write researchers led by University of Zurich ethologist Simon Townsend in their new meerkat study, published Oct. 11 in Biology Letters.

Of course, many animals clearly recognize individuals by scent and sight. But those abilities are considered less cognitively-demanding than vocalizations, which can be highly complex and imply mental representations of other individuals. The late, great ethologist Donald Griffin called vocalizations a window into animal minds.

For primates, the best-studied vocalizers, social relationships are often so complex and self-evident that it’s possible to play recordings of individual voices, then see how animals respond. A chimp will, for example, react differently to the voice of each different member of his group.

As for other mammals, experiments in natural settings have tended to involve tests of whether individuals respond to their kin, as with leopard seals recognizing their pups’ cries, or to general social categories.

In one unpublished study, meerkats responded differently to the voices of a group’s dominant female, but it wasn’t clear whether they recognized the individual or simply some categorical sign of dominance.

But Townsend’s team came up with a deceptively simple test that posed a physically impossible scenario to any meerkat capable of recognizing individual voices.

Using hidden speakers, they played recorded calls from one individual on one side of a target meerkat, and then from the other. The situation was similar to hearing a friend shout from the kitchen, then from the second-floor bathroom just a second later.

The meerkats reacted with a prolonged vigilance, paying much closer attention than they did to other recorded calls. The situation didn’t compute.

According to Townsend, the methodology could be applied to other animals that haven’t yet been studied, producing an animal kingdom-wide picture of individual voice recognition. That picture could help show what makes humans special — or, conversely, what seemingly special abilities are actually widespread.

“You see this ability in primates, which you’d expect,” said Townsend. “But the fact that we can show this in non-primate social mammals suggests the skill is omnipresent. It suggests that humans aren’t so unique.”

Read 2766 times
Published in News Technologique-Tech News
More in this category: « Philippe Starck: Evolution and Intelligent Design (No, Not That Kind ...) T-Mobile's SpringBoard Tablet Aims to Snuff Amazon's Fire »
back to top