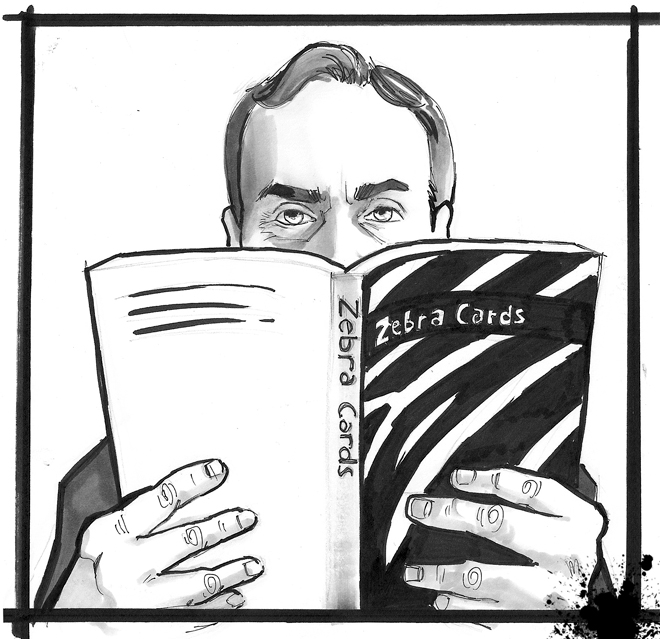 John Sotos might be an expert on obscure diagnoses, but that doesn’t mean he’s anything like the main character of House. He just needs to make sure all the acerbic things the brilliant but socially inept doctor says are true, in a scientific sense.

“It’s a dark show and I try not to live my life in such darkness,” the soft-spoken Sotos said in an interview with Wired.com. “So a lot of the character turns don’t speak to me.”

Sotos, who was trained as a transplantation cardiologist at Johns Hopkins University School of Medicine, is nevertheless the exact right man for the job of ensuring the accuracy of House. He literally wrote the book on the kind of unexpected diagnoses the show’s doctors make nearly ever episode. (The book is titled Zebra Cards: An Aid to Obscure Diagnoses.)

That’s not to say he doesn’t have to do his research for the popular show, currently in its eight season on Fox. The good doctor consults medical journals and books to find the connective tissue needed to flesh out the show’s medical storylines, though he counts himself lucky to work with writers who don’t give him too many factual headaches.

“They catch on really fast,” Sotos said. “Some things that I would have to explain to medical students two or three times the writers pick up on very quickly.”

Bona fides: Trained as a transplantation cardiologist at Johns Hopkins University School of Medicine. While a medical student, developed an interest in unusual signs of disease and wrote the book Zebra Cards.

How did you wind up on House?

“A friend of mine called me up and said, ‘Hey there’s a show on and the doctor reminds me of you.’ I don’t think she was saying that because she thought I was a jerk, but rather because of the technical topics that were being presented. So I watched a few episodes and I thought, ‘By George, this is sort of up my line.’ So I sent House a copy of my book, and a couple months later they invited me to come down.”

What kind of things are you asked to check or track? What’s your process?

“I get every draft of every script and I red-ink it for medical accuracy and — I like to think — for social responsibility as well. Some of the writers will call me pretty early in the process and say, ‘Hey, I have a character idea and I need some medicine to go with it.’”

Can you give us an example?

“Another time, a writer called me up and said, ‘I’d like this patient to present with a pretty common symptom. So, I thought, ‘Well sniffles are pretty common and Hansen’s disease (leprosy) can cause the sniffles. But not everybody with sniffles has Hansen’s disease. We ended up not using the sniffles part, but we did end up using the Hansen’s part. The writer decided to use formication — the sensation that insects are crawling on your skin.” 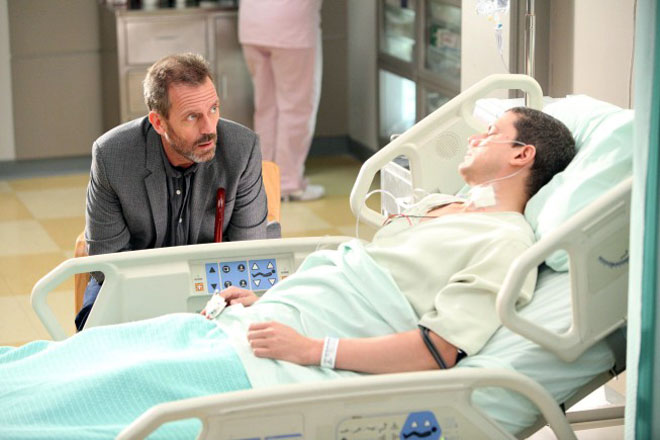 Do you ever advise Hugh Laurie about manners of speaking or anything?

“All of the characters’ words are very carefully written in the scripts. So I get the sense that there’s little to no ad-libbing. Occasionally there are questions about pronunciation on some of the medical words, but there’s a pronunciation guide with every episode. We have a full-time, on-set nurse, and she handles a lot of those types of questions.”

What kind of changes do you make to a typical script?

“Some of it is just vocabulary. For instance, they will use a phrase like ‘chest pain.’ Well, good doctors don’t talk about ‘chest pain’ because the sensation of angina isn’t really pain, it’s pressure or discomfort. So I’ll just change that word. Some things are more substantive. One thing we have quite frequently in the show are differential diagnoses, where the patient has presented with some set of symptoms and the team is throwing out various possibilities. Sometimes I’ll get a script and the various possible diagnoses that are written don’t really fit, so I will clean that up.”

‘If you see a big problem, you really can’t change the engine in the car with eight days to go.’

What about bigger-picture storylines or medical problems that run through the whole episode?

“Sometimes a writer will say, ‘I need to get from Point A to Point B. I have the patient with this set of symptoms and in the end I want him to need an MRI of his brain.’ So then you have to construct a plausible hypothesis that gets you to the brain. That can be quite challenging.”

Yeah, how would you do that? How do you get from, say, a twitching finger to an MRI?

“There are different levels of ways to link two things together. If somebody has a twitching finger and you want to get to his brain, you might say he’s having a seizure in a certain part of his brain that might be linked to a tumor up there. That’s a well-known clinical relationship, though. If no such relationship exists then what I generally do is fall back on mechanistic connects — the physiology of the human body. There was an episode in Season 3 or 4 where we had to get from the brain to the heart. The writer and I were having a lot of trouble. Finally, I just found an article that said asymmetric activation of the mid-brain can have an effect on the function of heart. That was something that I hadn’t even known before. Very few practicing physicians even know that.”

Tell me about last week’s “lungs in a box” thing.

“We have a full-time physician on the writing staff, and he wrote that episode. So I really didn’t have to weigh in as much as I usually do. Most of my red inks were pretty minor. I did suggest a joke they didn’t use. But they did talk a bit about the lung anatomy. The lung is divided into several lobes. I just had to clean up the way they were talking about the lobes. It was a very minor anatomical fix. That’s an atypical episode.”

What’s the biggest error you’ve ever caught in a script?

“When the first draft of a script comes out, it’s eight to 10 days until shooting starts. So if you see a big problem, you really can’t change the engine in the car with eight days to go. I remember one script I got had to do with a 5- or 6-year-old girl who had been exposed to testosterone cream and had started to menstruate as a result. That was a problem I couldn’t fix. Menstruation is caused by female hormones, multiple hormones, rising and falling in a choreographed way. To get a male hormone to trigger this physiology, I just didn’t see any way that was possible. I couldn’t throw in a sentence or two to fix it. There was no way we could substitute something else. So I just swallowed hard and said, ‘We’re just going to have to take our lumps on this.’ Three years later, I was reading a journal article about precocious puberty and I learn that exposure to testosterone can trigger central puberty. In other words, it can turn on a center in the brain that starts normal puberty going at an early age, so this would be an explanation for what this writer wrote. I called this writer up and said, ‘Did you know about this?’ But I’m not going to tell you what she said.”

Has there ever been an error that made it to air that you wished you’d had caught?

“It’s usually minor stuff. I went to Hopkins and there we revere a physician named Osler. And the pronunciation came out wrong. My heart just sank when I heard that. It was like I let my people down back in Baltimore.”

Read 6089 times
Published in News Technologique-Tech News
More in this category: « How Two Scammers Built an Empire Hawking Sketchy Software How Salt Could Multiply Hard Drive Space »
back to top