Could a Bug Circus Charge Your Phone?

Hat tip to John Burk (@occam98) for sharing this video (an ad for Snapdragon):

Well? Could this work? First, I am going to assume this is fake. Although I don’t know a whole bunch about bugs, I assume you can’t train a praying mantis to ride a bike.

Fine, it is most likely fake. But is it possible anyway? Ok, let me try to estimate this possibility. First, let me point out that some of these circus acts probably aren’t for the generation of power. The merry-go-round for instance. It seems like those bugs are just having a good time and not working hard like the scorpion and beetles. Maybe they are on their union break.

Let me at least get an estimate for the power produced from the tarantula on the inclined treadmill. 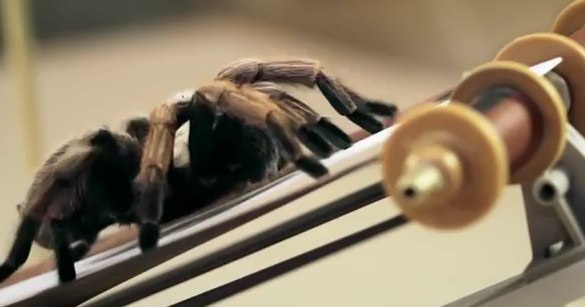 Here are some starting assumptions:

One final assumption: The work done by the spider (and the power) are the same for this treadmill as it would be for the spider walking up the incline. So, let me calculate the power the spider would need to walk up that incline at the same speed. Here is a force diagram: I can find the value of this frictional force (and the force the spider pushes) by looking at the forces along the plane. The plane-component of the weight and the frictional force have to have the same magnitude:

Now, what about the work? The work done by the spider will then be:

Where x is some distance up the incline. To determine the power, I need to know the time it takes the spider to go this distance. If the spider moves with a speed v, then t = x / v. This means the power is:

Oh, let me call the efficiency e then the electrical power output from the device would be:

Using the estimated values above, this gives a power production of 0.0017 Watts. WOOO HOO! That is some serious power. Instead of looking at all the bug devices, let me just say that there are about 10 of these spider-treadmills that all produce the same power. This would put the circus at 0.017 Watts.

I have looked at phone charging before (charging a phone by typing). From that, I used a 1420 mAh battery at 3.7 volts. This gives a total amount of stored energy at 1.89 x 104 Joules.

Using my bug-circus, how long would it take to charge this phone?

That is just over 1 MILLION seconds or almost 13 days. Yes, thirteen days seems like a long time. However, you can at least enjoy the greatest bug show on Earth while you wait.