Artist Imagines Deer to Evolve to Have Horn-Mounted Artillery 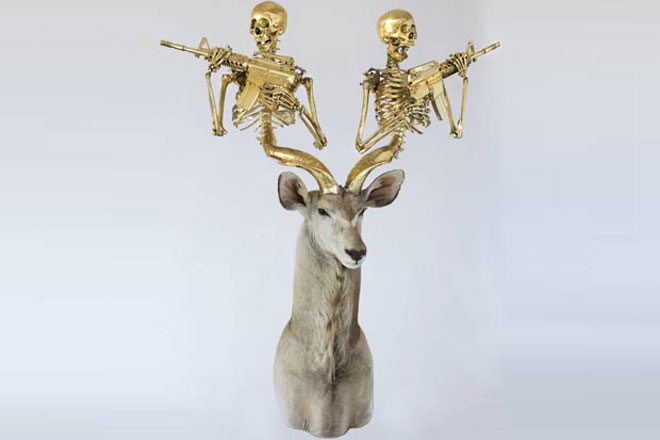 Gun-wielding golden skeletons and other bizarre items get added to stuffed animals' horns in Peter Gronquist's art exhibition, The Evolution Will Be Fabulous.

Artist Peter Gronquist has reimagined a collection of hunting-trophy animals with their horns pimped out to feature elaborate weapons and precious metals.

He has taken taxidermy animals including a buffalo, wildebeest, zebra, rabbits and other creatures and then created extremely ornate horns featuring replica rifles, machine guns and AK47s as well as human skeletons, flowers, luxury brand logos and other such decorative flourishes.

The idea came to Gronquist when he had a taxidermied antelope in his studio. He told Wired.co.uk: “I started wondering what it might be like in a future where animals had evolved to fight back. I call it ‘absurdist futurism.’ The iconic logo-horned animals derive from my dreams about the future of branding, which I like to think will include genetic branding.”

The artist buys the taxidermy from auctions and describes the taxidermists as the “unsung heroes of these pieces.” He explains: “Some of them are so beautiful when I get them I almost hesitate to cut them up. The horns are made through many hours of sculpting and sanding.”

He uses aluminum and steel tubing for the outlines, then fiberglass and epoxy clay for the bulk of the form. The gun elements tend to be realistic toy replicas from eBay. Each piece is then sanded for anywhere between 20 and 50 hours before being plated in silver. Some are then coated with a gold paint, but he’s looking into getting them plated in 24 carat gold.

In one case, we see a kudu with golden horns that are topped by machine-gun-wielding skeletons; in another there is a gazelle with enormous silver horns supporting a large Yves Saint Laurent logo. Elsewhere there is a “Zebracorn” — a zebra featuring a large golden horn — and a series of five rabbits that have also been adorned with golden horns. Gronquist describes them as the “physical manifestations of my daydreams.”

Check out more of Gronquist’s images in Wired UK’s gallery. Or, if you want to buy one of the pieces, head on over to Gronquist’s website.