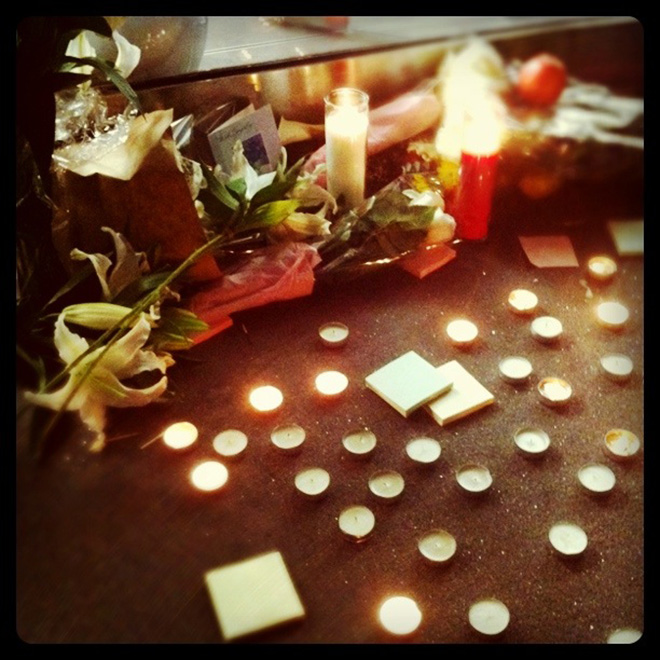 People gathered at the Apple Store in San Francisco to light candles and leave flowers and notes in memory of Steve Jobs. (Photo: James Merithew/Wired.com)

Apple has scheduled a company-only Wednesday memorial service for former CEO and co-founder Steve Jobs, who passed away two weeks ago. Employees at Apple’s Cupertino campus will attend in person, and various retail stores will close for at least an hour in order for employees to view a live broadcast of the service.

In an email to employees, CEO Tim Cook said that the memorial is being held “to take time to remember the incredible things Steve achieved in his life and the many ways he made our world a better place.”

The memorial will be held at an outdoor amphitheater at Apple’s headquarters, and could last from one to three hours.

Jobs passed away on Oct. 5 at the age of 56 due to complications relating to pancreatic cancer. Makeshift memorials were erected at Apple’s headquarters, as well as at Apple Stores around the world, to celebrate and honor the life of Apple’s longtime CEO. A private funeral was held Oct. 7, followed by a larger memorial service attended by coworkers, friends and a number of industry leaders.

Read 2375 times
Published in News Technologique-Tech News
More in this category: « Minecraft Creator Triumphs in Trademark Battle A Google-a-Day Puzzle for Wednesday, Oct. 19 »
back to top