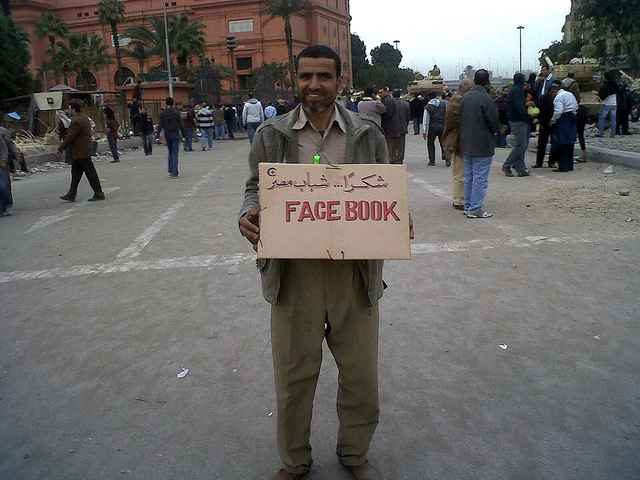 This has to be a first in the annals of social media. The commander of NATO’s Libya war has announced his intent to end hostilities through Facebook.

In a short post on his Wall Friday morning, Adm. James Stavridis told the world, “I will be recommending conclusion of this mission to the North Atlantic Council of NATO in a few hours.” Needless to say, we Like this.

Stavridis added, “A good day for NATO. A great day for the people of Libya.”

And a historic day for the way we interact. NATO has yet to put out any such official press release; its last one on Thursday merely said the North Atlantic Council would consider the issue of ending the war as early as Friday. Stavridis hasn’t even posted the announcement on his NATO blog. But for good measure, he also tweeted his big news.

“Who could have predicted,” asks my colleague Mike Isaac in WIRED’s new app guide, discussing Facebook’s mobile app, “that one skinny nerd from Harvard would completely change the definition of social experience in the 21st century?” The power of Mark Zuckerberg’s creation has been on display all year as the Arab Spring has reshaped the Middle East.

No, social media didn’t cause the revolt. But Facebook, Twitter and YouTube have been what the military calls “force multipliers,” amplifying the effects of the social movements that destabilized entrench dictatorships by allowing people to organize internally and broadcast their message globally in real time.

To wit: Secretary of State Hillary Rodham Clinton actually learned about Moammar Gadhafi’s downfall through her BlackBerry. And if Clinton had been able to get to Twitter earlier, she might have learned of the end of the Gadhafi era like the rest of us: as it was happening in Sirte.

Stavridis’ announcement is another milestone for social media. In this day and age, it’s rare for wars to end at all. But now, major geopolitical announcements like the conclusions of hostilities occur through fora typically used for sharing goofy videos or telling people how tasty their sandwich was.

Let me formally apologize to Adm. Stavridis for knocking his use of social media last year in a piece on the “Military’s Worst Tweeters.” Back in December, I was surprised that the technophilic Stavridis — considered one of the brightest Naval officers of his generation — largely used his Facebook and Twitter accounts for publishing inane material. Suffice it to say that this announcement renders my criticism irrelevant. My apologies, admiral.

The North Atlantic Council still has to formally vote to end the conflict. But once Stavridis submits his recommendations, it’s as good as over. And if you’re a fan of the admiral’s Facebook page, you learned of his intent to end the war before many officials in NATO capitols did.