From Anakin and Ahsoka’s underwater battles to C-3PO and R2-D2’s absurdist robot allegory, the fourth season of Star Wars: The Clone Wars has been lightening up last season’s insidious intrigue. 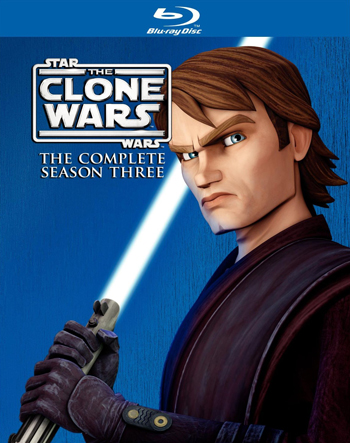 Which is sort of a shame, since the animated show’s deliciously dark third season was arguably its best, from the fearsome surrealism of “the “Mortis” story arc to the series debut of Chewbacca and the return of Liam Neeson.

Season 3 arrived on DVD and Blu-ray this week, and Wired.com has your chance to snag a copy. The discs feature five behind-the-scenes featurettes — including “Witches and Monsters,” previewed above — as well as test animations, concept art and more than 30 deleted or extended scenes.

“We’re exploring it all,” supervising director Dave Filoni said in a press release. “Sorcery, the Force and even Darth Maul’s origins.” (The distinctive-looking but apparently hard-to-kill Sith apprentice makes his Clone Wars debut next spring.)

For your chance at winning one of five Blu-ray copies of Star Wars: The Clone Wars: The Complete Season Three, go to the comments section below and explain how and why the series does justice to the sprawling universe birthed by George Lucas a long time ago in an entertainment galaxy far, far away. Entries must be received by 12:01 a.m. Pacific on Nov. 1, 2011. Winners must live in the United States. May the Force be with you and yours.

Read 4312 times
Published in News Technologique-Tech News
More in this category: « On Facebook, NATO Chief Announces End To Libya War Hints of New Physics Crop Up at LHC »
back to top