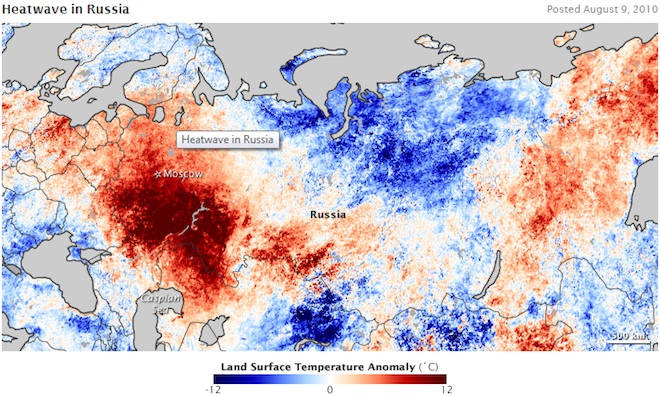 A new method of crunching climate data could make it possible to put a figure on climate change’s contribution to freak weather events, something that’s been difficult to do with empirical precision.

The debut subject: the Russian heat wave of July 2010, which killed 700 people and was unprecedented since record keeping began in the 19th century. According to the analysis, there’s an 80 percent chance that climate change was responsible.

While the influence of climate trends on weather is recognized as “loading the dice,” making extreme events more likely, individual events are still described in general terms of fitting patterns.

The new method, described by Rahmstorf and Potsdam geophysicist Dim Coumou in an Oct. 25 Proceedings of the National Academy of Sciences study, relies on a computational approach called Monte Carlo modeling. Named for that city’s famous casinos, it’s a tool for investigating tricky, probabilistic processes involving both defined and random influences: Make a model, run it enough times, and trends emerge.

“If you roll dice only once, it doesn’t tell you anything about probabilities,” said Rahmstorf. “Roll them 100,000 times, and afterwards I can say, on average, how many times I’ll roll a six.”

Rahmstorf and Comou’s “dice” were a simulation made from a century of average July temperatures in Moscow. These provided a baseline temperature trend. Parameters for random variability came from the extent to which each individual July was warmer or cooler than usual.

After running the simulation 100,000 times, “we could see how many times we got an extreme temperature like the one in 2010,” said Rahmstorf. After that, the researchers ran a simulation that didn’t include the warming trend, then compared the results.

“It will be useful,” said Trenberth, who noted that Rahmstorf’s conclusions “correctly” contradicted an earlier study that found no link between climate change and Russian heat. According to Rahmstorf, that study showed “an absence of evidence, not evidence of absence. We found the evidence.”

In future research, Rahmstorf and Coumou plan to run Monte Carlo simulations of recent record temperatures around the world. They may put their model to the ultimate test: not just explaining what’s happened in retrospect, but forecasting the frequency of future records. “You could predict the likelihood for what happens next, not just the past,” said Rahmstorf.

While the new method doesn’t consider the causes of climate change, Rahmstorf and Coumou write that “given the strong evidence that most of the warming of the past fifty years is anthropogenic, most of the recent extremes in monthly or annual temperature data would probably not have occurred without human influence on climate.”

Citation: “Increase of extreme events in a warming world.” By Stefan Rahmstorf and Dim Coumou. Proceedings of the National Academy of Sciences, Vol. 108 No. 43, Oct. 25, 2011.