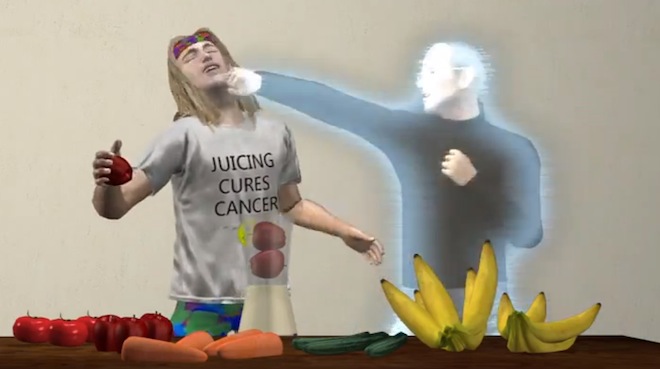 Steve Jobs' ghost punches his younger self in NMA's most recent video. Image: Next Media Animation

Those kooky Taiwanese animators from NMA.TV have reached a new high in campy 3D synthesis of real-world events: They’ve boiled down all 630 pages of Walter Isaacson’s Steve Jobs bio into a 90-second joyride through the book’s most juicy revelations.

For the Apple purist or the devout Steve Jobs fan, Next Media Animation’s video may be interpreted as sacrilege. But, no, it’s just hilarious, and all in good fun.

SPOILER ALERT: The animation opens with coverage of how the biography is flying off shelves. Then the fun begins. An iPhone projects Steve Jobs’ ghostly visage, which punches its younger self for not seeking out cancer treatment sooner. Steve later visits Barack Obama to tell him he’ll only be a one-term president. Other video highlights: Steve dancing at a rave (ostensibly on LSD), Steve riding an Apple-branded thermo-nuclear missile (think Dr. Strangelove) aimed at an Android army, and Tim Cook as Jedi-in-training Luke Skywalker.

But let’s let you decide. Take a gander at the video yourself, embedded below, and tell us what you think.

via Next Media Animation