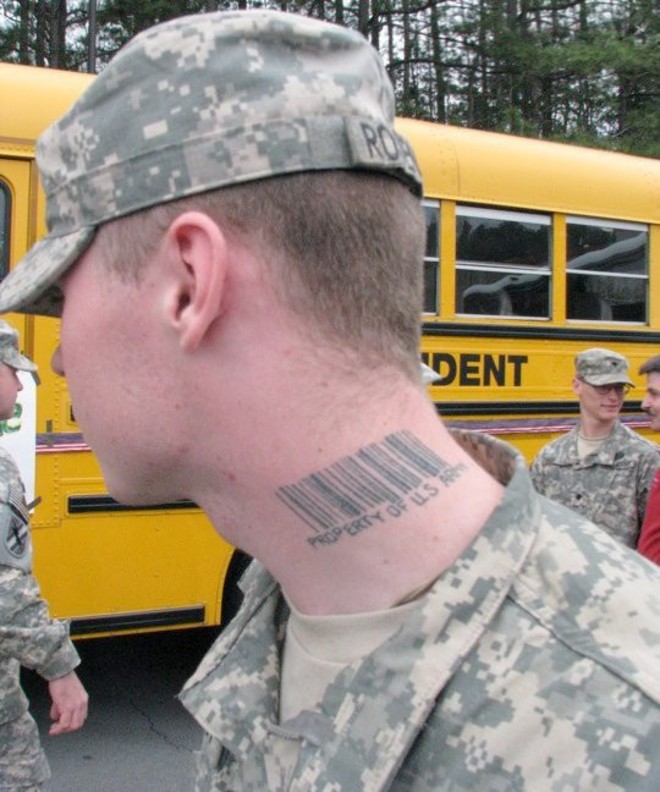 The Army’s Sergeant Major, Raymond Chandler, is sick and tired of military bases just teeming with thugs and hoodrats. So along with several other Army leaders, he’s looking to institute a major overhaul of the branch’s grooming standards, including rules for attire, hair, accessories and body modification.

“I believe we can better visualize to the American people and the Army what it means to be an American soldier than we’re doing now,” Chandler, the senior enlisted adviser to the Army chief of staff and the designated spokesman for enlisted soldiers, told Army Times. “Through personal grooming standards and standards of appearance … the uniforms and how we choose to wear them. I think we can do better.”

Soldiers typically don’t have much sartorial leeway. But after decades of strict restrictions, the Army in 2006 loosened up. They permitted neck and hand tattoos — just in time for soldiers to score some of those ubiquitous finger letterings that’ve been all the rage lately. Women can style their hair with braids and cornrows, are allowed discreet makeup and can even opt — if combat sometimes interferes with all that “putting their faces on” business — for permanent, tattooed eye and lip-liner. And men’s hair, once restricted to a buzz-cut, can now grow wild — provided it doesn’t graze the collar and “conforms to the shape of the [soldier's head].”

Now, Chandler wants to tighten things up — revisiting all kinds of fashion, beauty, and body-mod trends. He’s drawing up a list of grooming recommendations for the Army’s secretary general. Possible items on that list: limitations on French manicures, curbs on racy body ink and justifications — or lack thereof — for creatively sculpting one’s facial hair.

Even Danger Room’s preferred means of self-ornamentation, the tattoo, is being threatened with tighter constraints. Many Army leaders want to tighten up tattoo regulations to again nix ink on bodily extremities — a change that would mean disciplining unlawfully tatted troops by asking them to seek “medical advice about removal or alteration.”

Above all, Chandler is looking to return to a more literal interpretation of the Army’s intricately-detailed grooming policies. On paper, soldiers are forbidden “extreme, eccentric and trendy” hairstyles, including dreadlocks (aptly described by the Army as “unkempt, twisted, matted, individual parts of hair”) and hair colored with exotic hues like “fire engine red, fluorescent and neon.” Goatees and beards are big no-nos, and even mustaches should be carefully measured so as to never “extend sideways beyond a vertical line drawn upward from the corners of the mouth.” And that Prince Albert [NSFW] you love showing off in the chow hall? Think again, champ: All body piercings, including those on “surfaces of the body not readily visible” are out of bounds.

Chandler’s put out a call for commentary on his Facebook page, and has already elicited nearly 500 comments — many of them supportive — from soldiers. And with hundreds of troops already heading home and 41,000 slated to return from Iraq by Christmas, they’re likely embracing the chance to — finally! — debate such frivolous fodder as the do’s and don’ts of fingernail polish and tramp stamps.

“It is about dang time. I am so sick of seeing guys with neck and hand tattoos,” wrote Capt. Richard Telesco at Fort Lewis. “Every time I take my soldiers out for PT it looks like a biker gang is running with me.”

Others, however, are asking the Army to embrace the aesthetic whims of the 21st-century’s free-thinking troops — clit piercings and all.

Photo: Out of Regs

Read 3179 times
Published in News Technologique-Tech News
More in this category: « Taiwanese Animators Distill Steve Jobs' Bio Into 93 Seconds of Funny Win a Copy of Monsters in the Movies, Autographed by John Landis »
back to top