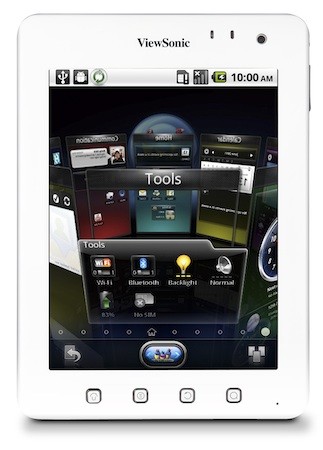 Amazon’s upcoming Kindle Fire aims to upend the tablet industry with its low cost and smaller form factor. The Fire has been dubbed the one serious contender to the iPad, which should have a holiday season stranglehold on tablet sales to the tune of 73 percent of the worldwide market. It’s no surprise, then, that we’re seeing other manufacturers following Amazon’s lead into the 7-inch display space.

Specs-wise, the 7e isn’t terrible for a $200 mobile device, but it doesn’t compare favorably to the Fire, at least in terms of raw processing power. The 7e runs a 1GHz single-core chip based on ARM’s A8 architecture, whereas the Fire runs a dual-core 1GHz chip. Both tablets will include a modest 512MB of RAM.

There’s only 4GB of internal storage in the 7e — 4GB less than the Fire — but that storage can be augmented with a microSD card, expandable up to 32GB. The Fire, meanwhile, is not expandable. The 7e also sports both rear- and front-facing cameras, two items that Amazon’s hardware lacks.

But all this hardware talk is arguably inconsequential, as taking on Amazon in a specs war is a losing battle. Amazon’s hardware is backed by a vertically integrated app store, a movie and TV show rental service, and a free month of membership to Amazon’s premium shipping service, Amazon Prime. What’s more, the ViewPad 7e won’t even ship with the Android Market app because ViewSonic’s hardware doesn’t meet Google’s requirements. Instead, the 7e will rely on Amazon’s Appstore for content. Ironic.

We’ve seen tablets from ViewSonic before, and they haven’t been pretty. The ViewPad 10 — a dual-boot Android/Windows device intended to appeal to many, though loved by few — was a disaster in our testing, freezing up often when we attempted to boot into Android. What’s more, the 7e lacks Adobe Flash support — a feature typically seen as one of Android’s main draws over the iPad — and its battery life clocks in at a dismal three hours per charge.

So that’s what we know at this point, and there’s nowhere to go but up for the 7e. Expect to see ViewSonic’s tablet in stores come this November.

Read 2844 times
Published in News Technologique-Tech News
More in this category: « Massive Lego Man Washes Up on Florida Beach On The Recipe Project, One Ring Zero Sets Weird Dishes to Music »
back to top