On The Recipe Project, One Ring Zero Sets Weird Dishes to Music 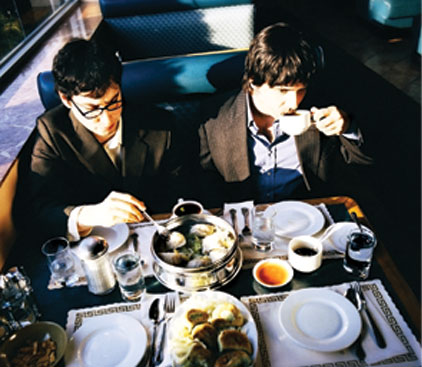 Looking for the perfect Halloween dish? How about some “Brains and Eggs,” from San Francisco offal wizard Chris Cosentino?

Better yet, why not chow down on the zombie-pleasing dish while listening to the chef’s recipe set to music?

Enter the distinctive nerd-hop of One Ring Zero, whose CD-book combo platter The Recipe Project: A Delectable Extravaganza of Food and Music arrived earlier this month from Black Balloon Publishing.

For the project, One Ring Zero, a musical group led by New York multi-instrumentalists Joshua Camp and Michael Hearst, used recipes from platinum chefs like Mario Batali and Tom Colicchio as lyrics. Then they paired the spoken recipes to tunes done in various sonic styles, from banda to metal.

The whole thing got served up with a side of informative food essays, making The Recipe Project a true feast for cuisine geeks. It’s a project worthy of the new breed of food pornographers, who have transformed cooking programming into an indulgent pleasure.

“Reality TV went supernova, and competitive food shows went along for the ride,” One Ring Zero co-founder Hearst told Wired.com in an e-mail chat. “The good news is that you can actually take something from a show like Chopped or The Next Iron Chef, much more so than Survivor or American Idol. Plus, everyone likes food! It’s almost like a lost art that has come back in vogue.”

For The Recipe Project, chefs picked out favorite musical genres and sat back as One Ring Zero transformed their culinary blueprints into tracks as straightforward as they are strange. The weirdest is Cosentino’s delicacy “Brains and Eggs” (in the video above), which is set to a bizarre, Beastie Boys-style anthem that could trade elbows with “Monster Mash” in Halloween’s novelty pantheon.

A close second is the entry from Momofuku mogul David Chang.

“Cosentino is a madman, in a good way,” said ice cream music-maker Hearst (who also happens to be Cosentino’s brother-in-law). “David is a complete gentleman, and likes to talk a lot of shit. But I think it’s fairly clear that all of the chefs involved with this project have an incredible passion for what they do. I think there is probably no way to run a restaurant — or several restaurants, books and television shows, as the case may be — without having a Type A personality.”

The Recipe Project really got cooking as Camp and Hearst laughed their asses off after creating “Brains and Eggs.” Cosentino and his spouse (and Boccalone salumerian) Tatiana Graf introduced the musicians to top-chef comrades like Michael Symon, Aaron Sanchez and John Besh. (You can hear another Halloween-appropriate selection — the They Might Be Giants-like bounce of “Pickled Pumpkin” — in the stream at left.)

“The idea for the recipe project was almost a no-brainer,” Hearst wisecracked. “Josh and I have always had a fascination with the culinary world and food shows. I didn’t have cable when the Food Network first launched, so Josh would record the original Iron Chef to VHS tapes and let me borrow them.”

Hearst’s fascination with food has become an occupational hazard. Five years ago, he took a job at Brooklyn’s Patisserie Colson to “eat pastries and drink as much coffee as my veins would allow,” he said. His sister Graf eventually moved to San Francisco with Cosentino and helped start the Ferry Plaza Farmers Market. Throw in TV’s proliferating food programming and you’ve got a recipe for musical collusion.

“This phenomenon has propelled chefs into mega-celebrities, but has also led to an even larger phenomenon: A greater interest in good food,” Hearst said. “So The Recipe Project serves multiple purposes. It makes a bit of a statement about the culinary world’s current absurdity, but it’s also just a super-fun listen and read.”

One Ring Zero performs The Recipe Project Nov. 3 at The Brooklyn Kitchen.