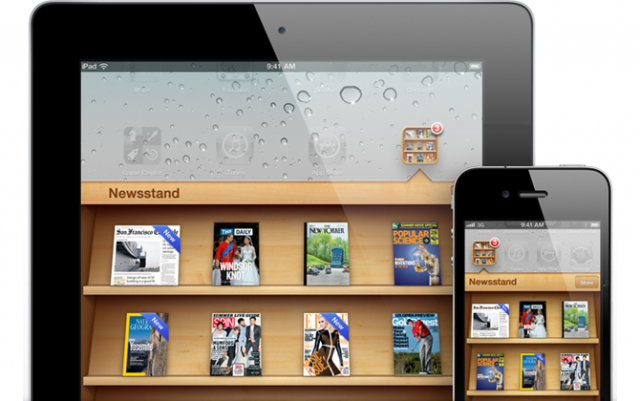 Newsstand, a new feature of iOS 5, is hitting it big with traditional media publishers thanks to its windfall delivery of new digital subscriptions.

Newsstand appears as a folder on the iOS home screen, funneling all your digital magazine and newspaper app subscriptions into a single location. It provides easy access to these apps, automatically updates them in the background when new issues are released, and — here’s the payoff — includes a built-in store for purchasing subscriptions. Purchased titles are displayed individually on Newsstand’s virtual bookshelf.

“Apple Newsstand is changing the way people buy and read magazines, similar to how people bought and listened to music through iTunes. It’s revolutionary,” says Collin Willardson, director of digital marketing at PixelMags, a digital publishing platform for a number of high-profile media brands, including Esquire, Dwell, Men’s Health and Cosmopolitan.

“We quickly started to realize just how big of an impact Apple Newsstand was having on our business when on the morning after launch, I received a phone call from our server company wondering if we were under attack,” said Ryan Marquis, PixelMags’ founder and COO, in a company’s press release. “I told them that we were for sure — from all the new iOS 5 users who wanted to download magazines from us.”

Conde Nast, Wired’s parent company, saw a 268 percent spike in subscriptions since the Newsstand app landed. “It’s clear that the focused attention and greater discoverability that Newsstand provides our brands has been embraced by the consumer,” said Monica Ray, Executive Vice President of Conde Nast.

Without a doubt, Newsstand increases the visibility of subscription-based magazine and newspaper apps, which often get buried under the onslaught of games, social media and photo apps that tend to dominate the App Store’s charts. But thanks to Newsstand, it seems, the National Geographic iPad app managed to reach the #18 spot in the Free Apps chart last week. The New York Times iPhone app is #27 today. And with a button that takes you directly to the magazine and newspaper section of the App Store, the Newsstand app makes it easy to snatch up subscriptions to quickly fill its own empty shelves.

Other success stories: New York Times app subscriptions absolutely soared after Newsstand launched. Its iPad app alone saw 189,000 new user downloads, seven times the number from the week before (27,000). The New York Times saw even more remarkable numbers for its iPhone app: 1.8 million downloads, or 85 times more downloads than the 21,000 of the week before. Meanwhile, Future Plc, a UK-based publisher of niche consumer-enthusiast magazines, saw a 750 percent increase in sales after Newsstand debuted.

But not everyone is happy with the addition of Newsstand to the iOS ecosystem. For some iOS users, the empty, glaring bookshelf of the Newsstand icon has been a source of irritation. Indeed, the addition of Newsstand is listed as one of very few complaints about iOS 5 across the web. Because Newsstand is a folder, rather than an app, you can’t easily remove it from your home screen, but some clever folks figured out a workaround that doesn’t require jail breaking.

These individuals, however, seem to largely be in the minority. Legions of users are filling up those bare shelves with digital subscriptions, giving a much-needed boost to magazine and newspaper app makers, and the publishing industry in general.