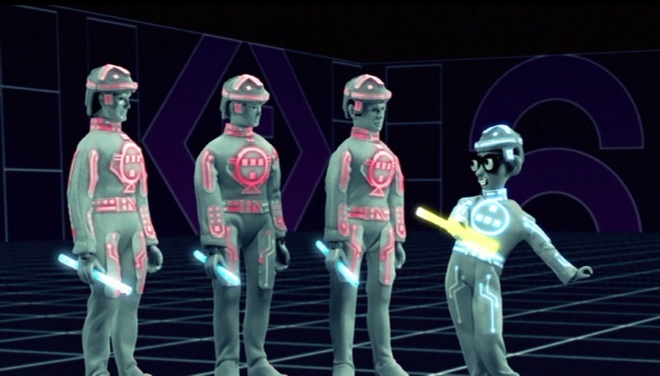 Robot Chicken's satire dragnet snatches up everything from Tron (above) to Gigli Season 5.

Are you a fan of Robot Chicken, Adult Swim’s boys-with-toys wisecrack factory? If so, profess your love in the comments section below for a shot at winning a copy of Robot Chicken: Season Five. 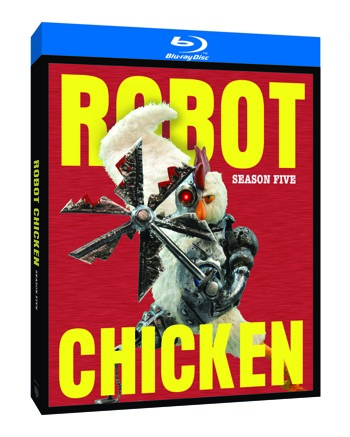 Spoiler art! The complete Robot Chicken: Season Five dropped Tuesday, but several of the episodes have yet to air.
Images courtesy Adult Swim

Releasing Season 5 episodes on disc first might be a marketing first of some kind, but who has time to analyze distribution stratagems when there’s much fun to be had at the expense of terrible fanboy movies like The League of Extraordinary Gentlemen and Daredevil?

Plus, the major question is whether Robot Chicken can keep its pop mockery up and running in its sixth season and beyond. Lay your Robot Chicken wisdom eggs in the comments section below for a chance to win one Blu-ray collection or one of two DVD copies of Robot Chicken: Season Five that Wired.com is giving away to the geekiest Chicken heads out there. Entries must be received by 12:01 a.m. Pacific on Nov. 2, 2011.

Read 4496 times
Published in News Technologique-Tech News
More in this category: « Apple's Newsstand a Huge Success for Digital Publishers Why You Shouldn't Care Whether 4G iPhone Rumors Are True »
back to top