Why You Shouldn't Care Whether 4G iPhone Rumors Are True 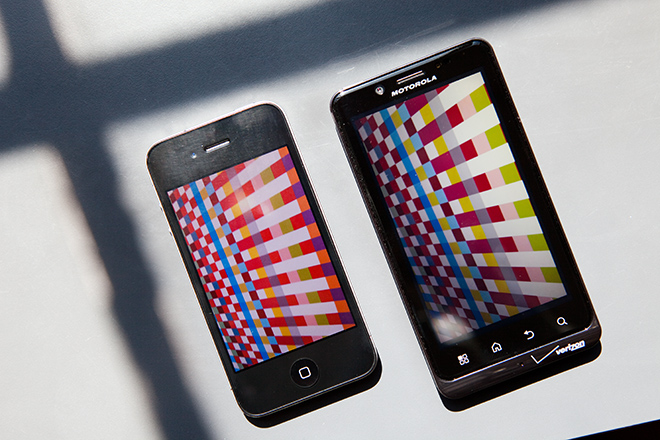 The 4G-capable Droid Bionic next to an iPhone 4. Photo: Jim Merithew/Wired.com

When the iPhone 4S spec sheet was officially revealed in early October, consumers were disappointed to learn that Apple’s newest iPhone doesn’t support 4G, or fourth-generation wireless data connectivity, as rumored. But now it looks like a 4G/LTE iPhone will arrive next year. According to sources that just spoke with DigiTimes, Apple will “join the LTE club” in 2012.

Well, here’s a reality check for Apple fanatics who just can’t sleep at night until 4G shows up in an iPhone specs listing: LTE support made no sense for Apple in 2011, and LTE probably won’t rock your world in 2012 either. We’re not saying Apple won’t release an LTE-capable iPhone. But we are cautioning you to temper expectations of how an LTE iPhone may change your lives.

The LTE network infrastructure is currently immature, and while carrier coverage will expand as more and more customers demand 4G support, relatively few people should expect their iPhone 5s to deliver 4G speeds in 2012. Indeed, LTE support isn’t something that Apple can just instantaneously “flip on” for everyone. A host of technologies — from network towers to hardware chipsets – must first converge, and if the short history of 4G deployment is any indicator, Apple’s 4G future could be bumpy.

4G Is Great — If You Can Access It, That is
4G network expansion has been slow and somewhat fragmented for all carriers. There are two competing 4G standards — WiMax and LTE — and when 4G network support has rolled out, it’s been limited to select markets.

Sprint was the first to adopt a fourth-gen network with WiMax as its 4G flavor of choice. Then Verizon rolled out its 4G LTE network, and its speeds and coverage dominated the 4G scene. AT&T began delivering 4G LTE to select metropolitan areas this summer, but previously relied on HSPA+ for 4G-caliber speeds, just like T-Mobile.

Indeed, what constitutes actual “4G” has been hotly debated, and AT&T’s HSPA+ network should really be considered 3.5G if you actually study bandwidth numbers. For that matter, HSPA+ has even been upgraded to 4G status by the International Telecommunications Union, the key agency that defines telecom standards.

The upshot for AT&T iPhone users? You already have 4G service — or at least the HSPA+ variant. All of LTE’s data rate and latency specs are better than those of HSPA+, but it’s all academic if you can’t tap into an LTE network.

But still, gosh dernnit, iPhone fanatics want support for LTE, which is becoming the defacto, must-have 4G industry standard, at least here in the U.S.

Oh, You Care About Battery Life Too?
There’s also another a rub — a rub that Apple is acutely aware of, and has likely influenced its LTE decision-making: 4G phones drain battery life like you wouldn’t imagine. In fact, every 4G phone that I’ve tested has demonstrated terrible battery life (some worse than others, as screen size and battery capacity do come into play).

Also worth noting: Inconsistent data speeds across 4G networks have plagued users, and that’s a customer experience nightmare that Apple wants no part of.

And then there are concerns about design compromises. In a conference call earlier this year, Apple CEO Tim Cook said, “The first generation of LTE chipsets force a lot of design compromises with the handset, and some of those we are just not willing to make.” The iPhone 4S, on AT&T at least, provides 4G-like speeds, so we can begin to see why Apple didn’t turn on the LTE spigot for its new phone.

Many consumers anticipated Apple to release a 4G handset this year, but Forrester’s Golvin wasn’t one of them. “In contrast to the network technologies that are in the 4S, which comprise the vast majority of 3G networks around the world, there are very few LTE networks launched today,” Golvin says. Additionally, he says, current U.S.-based LTE networks rely on frequency bands that aren’t widely used across other parts of the world.

“If the iPhone 5 comes in June or later, I think that Apple will likely have LTE,” Milanesi says. She cites battery consumption and lack of voice support as two big reasons why Apple hasn’t yet adopted the technology. Verizon has previewed a voiceover LTE service that would provide better sound quality than traditional cellphone calls.

Another reason why the time wasn’t ripe for a 4G iPhone: The cost of LTE chipsets would cut into Apple’s profit margins, and Apple would also have to develop more phone models to accommodate different frequency bands, reducing Apple’s margins further. Indeed, most current 4G handsets come in one model for the U.S., and one for the rest of the world, all thanks to frequency variations.

Because LTE networks aren’t yet widely deployed, a 4G-capable iPhone 4S would provide benefit for just a small portion of the global population. But by sticking with 3G technology for one more handset generation, Golvin says, Apple has been able to very efficiently produce a single global product that it can sell to AT&T, Verizon, Sprint and European carriers.

Golvin says, “A year from now, there will be more LTE networks live in more parts of the world, the chip costs will have come down, and it will likely make sense for Apple to include LTE in its — say it with me now — iPhone 5.”

We’ll believe it when we see it. And then we’ll immediately begin testing the handset in various locations to see just who’s really served by LTE support.

Read 2175 times
Published in News Technologique-Tech News
More in this category: « Win a Copy of Robot Chicken: Season Five Defense Industry: Keep Paying Us or the Economy Dies »
back to top