The FBI considers the fans of shticky rap group Insane Clown Posse to represent a threat on par with the Crips, Bloods, and Aryan Brotherhood, according to its annual report on gang activity.

You might think Insane Clown Posse’s people — known as the Juggalos — are just a group of face-painting teenagers who wonder how magnets work. Not so, says the FBI’s 2011 National Gang Threat Assessment. To the feds, Juggalos are a “loosely-organized hybrid gang” that are “forming more organized subsets and engaging in more gang-like criminal activity.”

Consult page 22 of the FBI’s brand-new annual report on gang activity nationwide. (.PDF) Listed in the same breath as street gangs with ties to murderous Mexican drug cartels is the Juggalo threat.

“Although recognized as a gang in only four states,” reports the FBI’s National Gang Intelligence Center,” many Juggalos subsets exhibit gang-like behavior and engage in criminal activity and violence.” It takes a footnote to disclose the connection to the Insane Clown Posse. Which would make rappers Violent J and Shaggy 2 Dope the Kenneth “Supreme” McGriff or Tookie Williams of their nefarious Juggalo army. 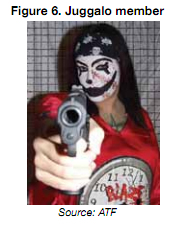 An example of a Juggalo in the FBI report

Other gangs cited in the report, like the Haitian Boys Posse or the Custer Street Gang, are linked to homicides, gun running, and drug trafficking. Juggalo gang activity cited by the FBI cites is a notably lower caliber: thefts, hand-to-hand drug sales and felony assaults. The FBI has recently had difficulty distinguishing ordinary American Muslims from terrorists; now it appears it has a similar problem distinguishing teenage fads from criminal conspiracies.

“Social networking websites are a popular conveyance for Juggalo sub-culture to communicate and expand,” the FBI warns.

Worse, “Juggalos’ disorganization and lack of structure within their groups, coupled with their transient nature, makes it difficult to classify them and identify their members and migration patterns.”

Actually, all the feds would have to do is wait for an Insane Clown Posse tour to roll through town. That’s what Brian Raftery did last year for a WIRED profile of Juggalo Nation. His description of the Juggalo threat:

They tend to feel that they’ve been misunderstood outsiders their whole lives, whether for being overweight, looking weird, being poor, or even for just liking ICP in the first place. It’s a world where man boobs are on proud display, where long-hairs and pink-hairs mingle, where nobody makes fun of the fat kid toweling off near Lake Hepatitis. For them, the Gathering is a place they can be accepted, a feeling reinforced by the constant chants of the Juggalo credo “Fam-uh-LEE! Fam-uh-LEE!”

The FBI even cautions that the Juggalos are among 53 gangs “whose members have served in or are affiliated with the U.S. military.” My colleague Katie Drummond somehow neglected to report the Army’s policy on face paint in her recent story on military body modification.

Most problematically, since Juggalos evidently believe themselves to be badasses, an FBI report legitimizing their outlaw image will surely embolden them. A generation of teenagers will come to believe it is acceptable to spray each other with Midwestern-specific soda and devalue lyricism in hip hop.

Read 3254 times
Published in News Technologique-Tech News
More in this category: « Cookie-Cutter Cat Not as Cute as the Name Sounds Corning's New Lotus Glass Promises Higher-Resolution Displays and More »
back to top