Review: In Time Is Tepid Sci-Fi With an 'Occupy' Message 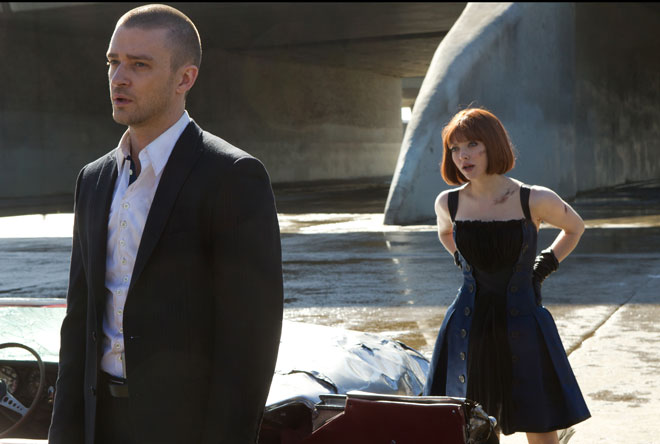 Justin Timberlake and Amanda Seyfried run from Timekeepers and Minutemen in In Time.

They should screen In Time at “Occupy” sleepovers around the country. It’s a tepid sci-fi movie with a simplistic message about “Darwinian capitalism” that should resonate with the crowds assembling to protest the current state of affairs.

That message is: Rich people are bad and the system is rigged.

In the dystopian future nightmared up in the movie, which opens Friday, working-class zeros face a relentless industrial hell that makes our current debt-fueled recession look like a picnic. The blue-collar drones of In Time would never think of sitting around “occupying” Wall Street or anything else — in their world, time is literally money, and most people seem to be within a day or so of running out, which results in sudden death.

Time is money, and individuals' constantly dwindling bank accounts are displayed on their forearms.

A $4 Starbucks latte seems like a bargain compared to In Time’s paranoid PG-13 scenario, in which you trade four minutes of your life for a cup of coffee. In that horrible world, work a double at the factory and you might earn enough to sleep in, but the clock’s always ticking.

What’s worse, it’s ticking in your arm. As explained in the movie’s breezy prologue, some sort of genetic-engineering breakthrough has transformed human life so that everyone stops aging at 25, at which point they have exactly one year to live. Everybody’s remaining time is conveniently tracked in florescent-green digital readouts embedded in their forearms. The upshot is that the rich are basically immortal, as long as they don’t choke on a spoonful of caviar or wreck a fancy car.

It’s an interesting concept, but that’s about as deep as the thinking goes. In poor “time zones,” the people are always running about in a hurry; in the rich sectors, the elites relax and gamble away spare decades. As the movie unfolds, we get sinister glimpses of a deeper conspiracy afoot — laced with loopy talk about crashing the market if too much time gets into the wrong hands — all based on the concept that for a few to live forever, many must die. We also learn that the father of Will Salas (played by Justin Timberlake) was some sort of freedom fighter, presumably in a half-hearted attempt to give the character depth. 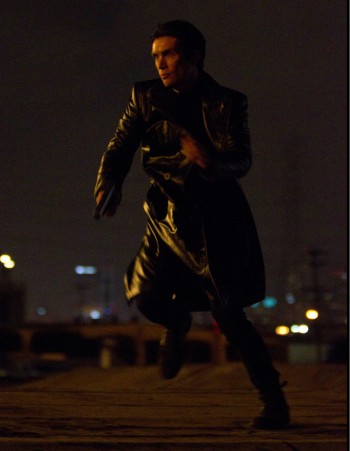 What we’re left with is basically a chase movie. Shortly after a suicidal time baron leaves his fortune to Salas, a disastrous turn of events sets him on a course for revenge. He makes his way to New Greenwich, where the rich people live, intent on making “them” pay. He quickly runs into Sylvia Weis (Amanda Seyfried), daughter of oily time baron Philippe Weis (Vincent Kartheiser).

After she lays out the dilemma of the rich — living in fear, they shy away from any type of risk — she and Salas share a little bit of old-fashioned skinny-dipping as she discovers the raw joy of the ocean. Soon he’s kidnapped her and the pair are off and running, dodging cops known as Timekeepers and time-thieving thugs known as Minutemen. (There’s plenty of that kind of time-oriented punning in the movie, so brace yourself — you can almost set your watch by it.)

Director Andrew Niccol (Gattaca, S1m0ne) obviously loves thinking big thoughts. “When I was doing Gattaca,” he told Film School Rejects, “I knew the holy grail of genetic engineering was to discover the aging gene, and switch it off. You’ll see, even in Gattaca, the symbol of the genetically superior in this world is the infinity symbol. Obviously, their goal was to live forever…. [The two movies are] not intentionally tied together, but the implications are so great. If everyone could live forever, then there would be massive overpopulation, so that’s why I came up with the idea of trading time.”

Unfortunately, this high concept could use some solid grounding. Niccol is making an extremely timely (forgive me) if ham-handed argument about the roles of the rich and the poor in a capitalist system, but all the broad-brush talk about the abuses of the superwealthy and the importance of valuing your remaining time on Earth does nothing to elevate In Time beyond the pseudo-intellectual realm. None of it feels very visceral or all that original.

We’re left with an action movie with stylish cinematography, ridiculous arm-wrestling duels and cerebral ambitions. Timberlake is undeniably good at running, and he’s not a half-bad actor. In a movie almost devoid of special effects — the gritty slums and gilded mansions of various time zones are retro-futuristic, meaning we get sleek sports cars, not jetpacks — Seyfried’s beautiful bug eyes steal the show. The two main characters are likable enough, and Cillian Murphy plays the creepy Terminator card as a stony Timekeeper intent on bringing Salas to justice, but it’s hard to care about anybody’s fate without the proper groundwork being laid.

Worse yet, In Time squanders its built-in mechanism for generating tension. When people “time out,” their deaths are almost laughably simple. 24’s ticking clock made for much more taut entertainment.

That’s probably because, much like the Occupy movement, In Time can’t seem to decide what it wants to be. Is it a Logan’s Run ripoff? A Gattaca clone? A Total Recall parable about the oppressed working class? A sci-fi Robin Hood or Bonnie and Clyde?

In the end, it’s a simplistic sci-fi story with clunky dialogue, few surprises and very little real insight into the human condition. They should’ve spent a little more time, or money, on the script.