Before launching my good friend and partner Peter Madsen into space on a first manned flight there is much to do. People always ask us when we are ready and I have to answer: well, when we are ready. The outcome of our experiments and tests dictates when we launch. We can’t do anything else than work as hard as possible while having fun. So, maybe anywhere between five to 10 years if you really want an untrustworthy answer.

Most subsystems can be tested on ground but there are times you need to go all the way with an actual launch to test in a correct environment. Engines can be tested thoroughly on the ground, but we cannot simulate the changing in surrounding atmospheric pressure and g-load on the propellant etc. Nothing beats the full-scale flying rocket. It’s our private wind tunnel, test center and a driver to keep the project going with smiley faces.

Testing parachutes is a complex matter as well. We can learn how to create, fold and deploy them but we can never know how they perform unless we do an actual drop test from a high altitude. Scaling a parachute is difficult and I don’t trust it. Our launch this summer was the first full scale test of our parachutes. Unfortunately they where deployed while the spacecraft flew too fast and in the thickest possible atmosphere, but we learned so much and still have confidence in the system. We have not succeeded in finding anyone that would guide or sell us parachutes for our shady purpose and we could probably find old ones on eBay. However, going down a path on our own which eventually will give us the skills in-house is much more fun and rewarding.

The most mission-critical area to learn and control is active rocket guidance. At least with our working method it seems like we are not going into space before we master this. Using hybrid engines, we do not use gimbaled nozzles. But Peter Madsen and the guidance team are working hard on a jet vane configuration, so far with success using tungsten/copper alloy jet vanes, which can stand the +3000 °C thrust saved by the heat sink principle.

To learn all of this without going through a similar complex mission like our June 2011 launch, we have decided to test our skills with an Apollo-like capsule launched using a Launch Escape System (LES). This will provide me with a perfect drop test for a parachute validation while Peter can test his engines and separation system between engine and capsule. 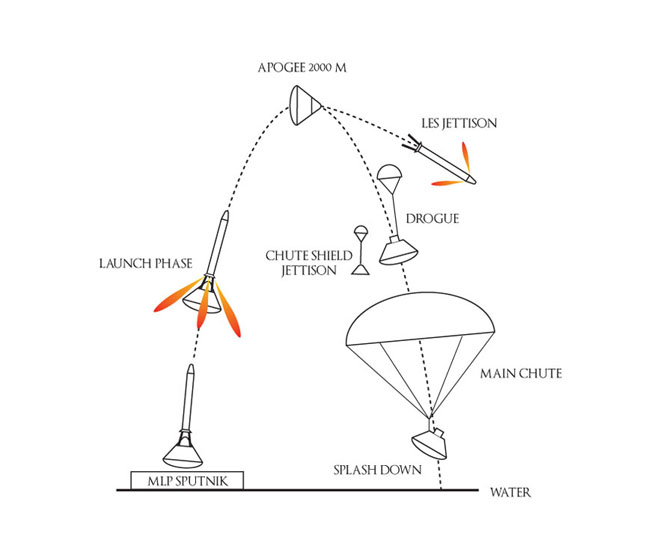 A LES was added to manned systems Mercury, Apollo and Soyuz. Other configurations like Vostok and Gemini had ejection seats. We like rockets and are probably not capable of creating emergency egress using ejection seats so we are going for the LES.

If a main launcher fails the LES will rapidly detach and launch the capsule in order to save the passengers. It was only used once in 1983 on a failed Soyuz launch providing 14-17 G in 5 seconds, sending the capsule to an altitude of 2,000 m.

So, in June 2012, we will do a LES/capsule launch and I am already in the process of making a boiler plate version of our capsule called Tycho Deep Space. Peter has already performed several very successful tests on a small version of his LES-engine called BabyLES.

The HEAT-engine used in the June 2011 launch is still our main work horse for future suborbital missions either as a one-engine configuration or a seven-engine cluster but needs to be developed further due to certain oscillations issues and to increase performance. This fall, citizens of Copenhagen will yet again be blessed with the roar from this 7 tonnes thrust engine when tested some few miles from the Little Mermaid. These tests are open to the public so if you happen to close by, join us.