Gmail for iOS: Now You See It, Now You Don't 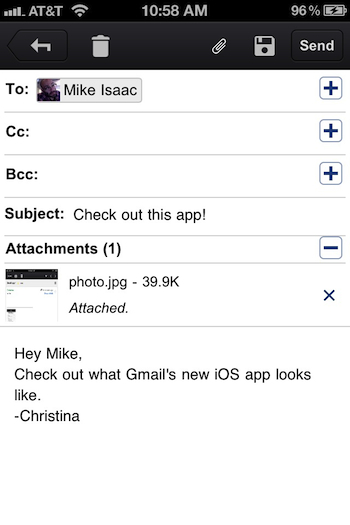 A screenshot of the Gmail iOS app on iPhone, which quickly disappeared from the App Store this morning.

The Gmail app for iPhone and iPad went live earlier today. After many users downloaded it and reported a bug, the app has now vanished from the digital shelves of the App Store.

Around 9:30 AM on Wednesday, Google pushed its Gmail iOS app live in Apple’s app store. But upon first launching the app, I and many others, got a “no valid ‘aps-environment’ error entitlement” error notification. Simply hitting OK and then relaunching the app allowed it to load apparently error-free (at least for me).

However, the app was removed about two hours later. Google’s cloud applications lead Dave Girouard tweeted: “Googla culpa! Sorry but we pushed a bad version of our iOS app for Gmail. More info shortly – we’re working on it.”

The post on the Gmail blog about the app is still live, so it’s possible we could see the app pop back up in the App Store in just a short time.

Before the app was pulled, we did get a chance to play with it, so we’ll have a first-look for you after the app is live again.

Wired.com reached out for more information on the issue from Google, and we’ll keep you updated if there are any new developments.

Read 3667 times
Published in News Technologique-Tech News
More in this category: « L’application Gmail pour iPhone disponible Ra.One Is Like Tron With Dance Numbers and Crotch Punches »
back to top