Ra.One Is Like Tron With Dance Numbers and Crotch Punches 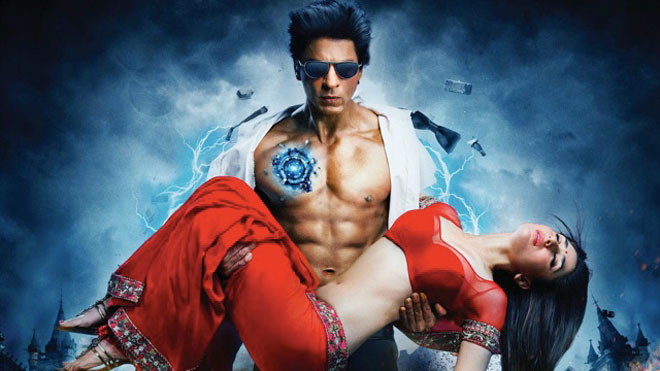 Bollywood superhero flick Ra.One is like Tron with dance numbers and crotch punches.

Well, that’s not entirely true. Calling the new 3-D Hindi superhero flick Ra.One the Bollywood Tron or Iron Man would be a bit of a misnomer. The most apt parallel for Ra.One would be Automan, that swiftly cancelled 1983 cop show about a crime-fighting hologram. And like Automan, Ra.One is shitstorm-preposterous in all the right ways.

Writer/director Anubhav Sinha’s Ra.One — which is being billed as the most-expensive Indian movie ever made ($30 million) — clocks in at an equally opulent 156 minutes. Such running times aren’t uncommon for Bollywood flicks, but stateside moviegoers can expect your local multiplex to run roughshod over the film’s built-in intermission. There’s a sizable chance your bladder will be a live grenade by the time the credits roll.

As a result of this leisurely minute count, Ra.One can be four or five movies at the same time. For the first 45 minutes or so, it’s a screwball family comedy. London videogame designer Shekhar Subramanium (megastar Shah Rukh Khan) desperately wants to impress his villain-loving young son Prateek, who likes Iron Maiden and plays online games under the moniker “Lucifer.”

After Shekhar fails to win over Prateek with his Michael Jackson impersonation (circa Bad), he vows to create the ultimate videogame malefactor to earn his son’s respect. Shekhar dreams up Ra.One, a post-apocalyptic supervillain composed of the 10 most evil men in human history (Hitler and Stalin among them). The last hope for humanity is G.One, a Tron-suited superhero with Shekhar’s own face.

(At this point, it must be mentioned that the videogame Shekhar designs is fantastically experimental. Ra.One is a Virtua Fighter-style fighting game with only three levels and requires a VR supercomputer to play. It’s unclear how this would translate to consoles, but Ra.One fucks logic in the earhole.)

Anyway, Ra.One is a huge hit with the gaming company. All the adults get drunk and celebrate with an Auto-Tuned dance number (right). Meanwhile, Prateek plays Ra.One on the company supercomputer and beats two of the three stages. This is a problem, as Ra.One (the character) is a super-powerful AI who escapes into the physical world to get even with Prateek.

One of the first things Ra.One does in the real world is murder Shekhar with a hard-light Hadouken. This was the first of several moments that left my mouth agape, as it was a shock on par with seeing the Nutty Professor (the Jerry Lewis one) incinerated alive.

Read 5679 times
Published in News Technologique-Tech News
More in this category: « Gmail for iOS: Now You See It, Now You Don't Yahoo's 'Manhattan' To Rescue Web From the iPad »
back to top