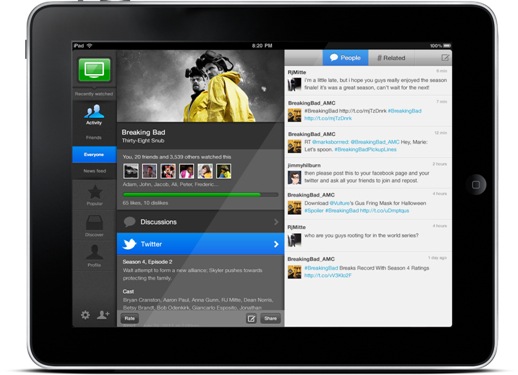 That app is IntoNow. It analyzes the audio from TV (or even YouTube) to figure out what you’re watching and deliver specifically tailored media to complement your video content. IntoNow has had smartphone apps for a while, but today, it introduces a new iPad app to take advantage of the 70 percent of us who use tablets while watching the tube.

To some degree, the app is like Shazam, but for TV content instead of songs you hear on the radio. You open IntoNow on your iPad and click a button. The app analyzes what it’s hearing from your video source for 4 to 12 seconds, and then delivers related content in the form of relevant tweets, news headlines, and even sport stats when applicable. When it was demoed for me, the app correctly identified Wolf Blitzer on CNN, and an obscure clip from Fresh Prince of Bel-Air that was primarily comprised of basketball dribbles and hand clapping.

Apps like Shazam and SoundHound can “listen” to a song, and, almost miraculously, tell you the song name and artist behind the track. But to pull this off, the song’s unique digital DNA, as it were, must have already been cataloged. IntoNow, however, must often identify and catalog live or unreleased content, from news shows to sports action.

IntoNow uses a process it calls fingerprinting to identify in real-time what it hears on your TV. Basically, every piece of audio creates an algorithmic representation of itself that serves as a unique identifier. It’s a process similar to biometric authentication. IntoNow has over 2.6 million airings — spanning everything that’s been on TV in the past five years — in its massive database, and all of this is used to help identify new content.

Could this be the future of how we’ll discover new information? “We’re moving away from text and text input,” IntoNow lead Adam Cahan says. The app is all about discovering context using a minimum number of inputs — for instance, the specific words Wolf Blitzer utters in a newscast. In the future, IntoNow’s real-time identification technology could be used on any device to provide information relevant to what your watching. 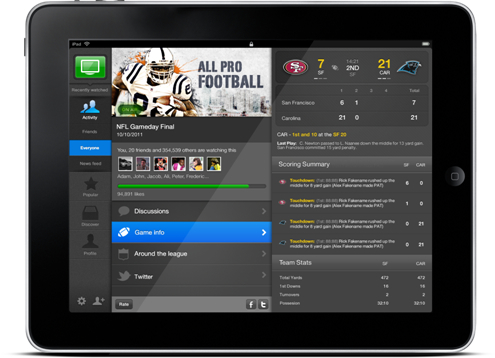 IntoNow debuted its iPhone app earlier this year, but presents a completely different focus and user experience in the tablet version. On the iPhone, the app is all about simple interactions and connecting with members of your social feeds. Tablets, however, are primarily used for consuming media, and IntoNow takes advantage of that.

After correctly IDing a show, you’re brought to a screen that displays the name and an image of the show, along with relevant media from Yahoo channels and Twitter. For instance, if you’re watching a live football game, you’ll be brought to a page that shows information about the game, including play-by-play stats, a game summary, and more. You can also get additional information about specific players, or the league at large.

For a news show, you’ll get more information about what’s happening onscreen (as well as real-time updates as the program continues), and previews of related articles so you can learn more about the topic being discussed. For a purely entertainment-based show, like Family Guy or The Walking Dead, you’ll get relevant Tweets from show cast members, as well as from users who are validated or authoritative on the subject. (So, no, you won’t see tweets from parody Twitter accounts.)

The IntoNow iPad app is free and available now.

Read 4017 times
Published in News Technologique-Tech News
More in this category: « The Raunchy Parody Products of Grand Theft Auto V A Google-a-Day Puzzle for Nov. 3 »
back to top