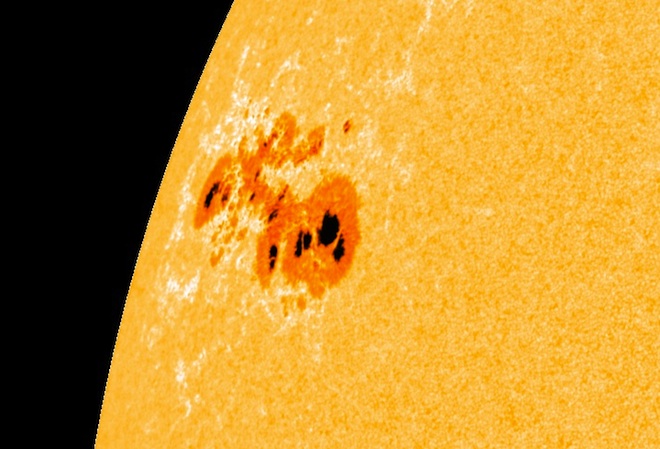 NASA’s Solar Dynamics Observatory has spotted one of the largest new sunspots to appear on the surface of the sun in years. It is nearly 25,000 miles wide, or more than three times larger than the Earth. The enormous sunspot was seen rotating over the sun’s northeastern limb on Nov. 3.

Any backyard astronomers with solar telescopes should be able to see the gigantic sunspot over the next few days.

Sunspots are relatively cool regions on the sun’s surface that are caused by strong magnetic activity. They are usually associated with eruptions such as solar flares and coronal mass ejections, events in which the sun spews out enormous amounts of energy and charged particles that may interfere with communications satellites in Earth orbit.

NASA reported that the region has already experienced about eight solar flares, including an M-class flare, the second-largest type of solar flare, on Nov. 2. The agency also said that X-class flares are possible, even up to X10 or greater events, the largest possible solar flares.