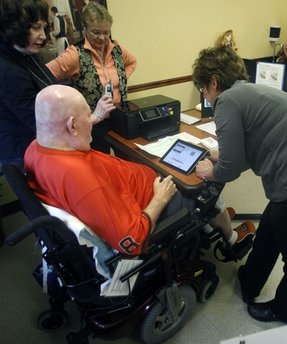 For some, going to the polls and voting in-person is near impossible, and even using mail-in paper ballots can prove difficult. But the state of Oregon has a solution: Pair an iPad with a wireless printer, and use this system to help cast ballots.

Voters in five Oregon counties will get to vote using the iPad this year. Apple even donated five of the tablets to the cause.

“It’s a lot simpler for me. I think it’s a great setup they got,” Lewis Crews, a 75-year-old with severe arthritis, told the Associated Press.

Using an iPad is a simple, cost-effective solution for helping the elderly and disabled to cast their votes. Election officials can tote the lightweight iPad and portable printer from location to location, and users simply tap the device to pick candidates, and print out their ballots. The iPads run special software that cost the state $75,000 to develop.

Voters can mail in their printed ballot, or place it in a designated ballot box. Those with poor vision can even adjust the iPad’s screen colors and text size, or have onscreen text read the ballot contents aloud.

Election officials believe Oregon is the first state in the US to implement iPads as a voting tool. To roll out the program statewide, though, Oregon would need about two iPads per county, which would run the state about $36,000. Still, using iPads could end up being less expensive in the long run. Last year, Oregon spent $325,000 on providing accessible voting tools.

Officials are careful to note that people using this voting method are not actually voting by iPad — that is, the iPad isn’t a voting machine, per se. Rather, voters are simply using the iPad to fill out their ballots, which are still printed on paper. Voting via iPad still presents problems for blind people, of course, but the system does bring us one step closer to private, fully independent voting for all.