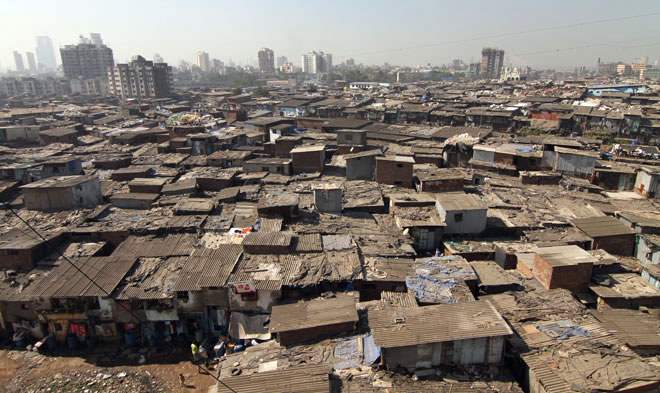 India's sprawling Dharavi slum is one of the eye-opening case studies in new documentary Urbanized.

The world’s population recently passed the 7 billion mark, causing us to think deeply, at least for a moment, about how global society is dealing with rapid population growth. It’s the perfect time for the release of Urbanized, a fascinating new documentary about cities and the forces that shape them.

The film, which is playing this week in limited engagements, takes a broad look at the design and development of urban centers big and small around the world, tackling issues like transportation, crime, public spaces, city planning, architecture, energy consumption and the growth of slums.

Urbanized does this through a series of short case studies. We see how cities like Rio de Janeiro, Mumbai and Santiago are using technology to improve the lives of their poorest residents. We see how New York transformed an out-of-use, elevated train track from an eyesore into the High Line walkway, a public space that runs 22 blocks through three Manhattan neighborhoods.

We see how cities deal with decay — successfully, in Detroit, where abandoned lots are turned into community gardens, and unsuccessfully, in New Orleans, where the Katrina-ravaged Lower Ninth Ward is being refashioned to look like a Malibu beach community.

Urbanized is the third documentary directed by Gary Hustwit, the man who brought us 2009’s brilliant Objectified and 2007’s geekiest indie hit, Helvetica, a riveting documentary about a typeface. Here, Hustwit keeps the pace as lively as in his previous films, tackling deep sociological and economic issues with the whimsy of a populist outsider. 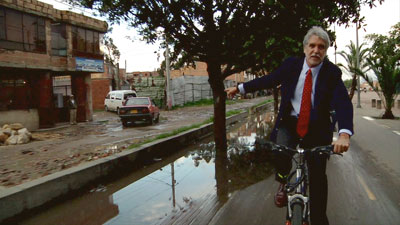 Enrique Peñalos, former mayor of Bogotá, points to a car plowing through mud while he rides a bike on a perfectly paved bikeway. It's one of Urbanized's biggest laughs.
Photos courtesy Swiss Dots Ltd.

The narration is supplied entirely by talking heads: architects, city planners, politicians and the occasional man or woman on the street.

Extra screen time is given to the more entertaining subjects. The former mayor of Bogotá, Colombia, steals the movie’s first half as he gives a guided tour of the city’s bike lanes and bus system. The folks participating in a public art project that tracks electricity use in Brighton, England, prove both bright and charming. Bruce Katz from The Brookings Institution should be given his own NPR talk show.

The result is a largely optimistic film, one that you could criticize for adding an unhealthy gloss to the serious problems of crime, corruption, overcrowding and decay in the world’s largest urban centers. But the movie is thought provoking nevertheless, and will encourage discussion. And I can’t fault a film for turning a rather dry and academic topic into something as full of life as the cities it depicts.

The unrated Urbanized is currently screening at New York’s IFC Center, Chicago’s Gene Siskel Film Center and San Francisco’s Yerba Buena Center for the Arts. It will continue to play in limited engagements worldwide, followed by a digital and DVD release.

WIRED Beautifully shot and edited. Illuminates and humanizes abstracts like city planning and mass transit. Eye opening — shows us how much design work we take for granted when crossing the street, using a bike lane or taking the bus to work.

TIRED Very brisk, could have benefited from additional material. Lacks depth in examination of big problems like crime and corruption. Musical score is uninspired.