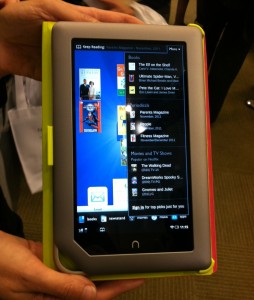 Tech companies can sometimes be touchy about letting journalists get their hands on brand-new devices. At today’s Barnes & Noble event, representatives demoed working Nook Tablets for the press, but we weren’t allowed to actually handle them ourselves. It’s a common precaution. Amazon did the same thing at its Kindle Fire launch event.

So I can’t in good conscience call the following a “hands-on” with the new Nook Tablet — and you shouldn’t give full credence to anyone else who promises a “hands-on” evaluation, either. I got to hold and touch the tablet, but not really use it in the way that I would in a solo demo, or researching a full review.

What follows, however, is an extended eyewitness account of what I’ve seen the device do in two separate demo sessions. It’s also a recap of conversations I had with Barnes & Noble staff.

As for the weight reduction, I suspect there’s a materials change in the outer case design, but joked that B&N was able to cut weight just by outfitting the tablet in a slightly lighter shade of gray.

The LCD screen is bright and clear, and handles video playback superbly. It’s 1024 x 600 (just shy of native 720p resolution) and boasts a 169 PPI pixel density. This is the same as the Nook Color, but most of the benefit comes from the Nook Tablet’s laminated screen and extra processing power and memory. In all, the internal hardware provides more than enough firepower to handle streaming HD video. (Network performance and webby plugins remain the real bottleneck to streaming video performance, and, indeed, native video of movie trailers and enhanced e-books performed better than streaming video of a TED talk.)

The combination of improved screen quality and processing power also makes gaming much more compelling on the Nook Tablet. With touchscreens, you want to feel like objects are right at your fingertips (not a millimeter beneath them), and responding instantaneously to your gestures (not a millisecond afterward). At this scale, even rapidly flipping back and forth between pages in a magazine becomes a game.

The Tablet’s 7-inch form factor is also ideal for many games. Playing a game like Angry Birds on a smartphone or iPod touch is an awkward dance of zooming and squinting. And on an iPad, it can be awkward to hold such a large device with one hand while making gestures to slingshot birds with the other. But on a 7-inch tablet with proper hardware inside, gaming feels just right.

In fact, an emphasis on gaming, video and digital comics (a new media category for Barnes & Noble, thanks to a big new partnership with Marvel) suggests to me that the Nook Tablet’s target audience (or one of them, at least) isn’t so much the middle-class career moms who snapped up the first-gen Nook Color, but rather their offspring, who love games, comics and Harry Potter. Indeed, the Nook Tablet is a serious, high-performing device for kids too young to sport a smartphone or iPad, and who don’t plow through enough books to warrant a Nook Simple Touch or plain-vanilla Kindle, but who could benefit from an inexpensive, highly mobile device that can do a little bit of everything.

This, I think, is still Barnes & Noble’s best strategy: Don’t try to go mano a mano with Apple or even Amazon, even if it may be necessary and a little bit fun to point out when and where you have a direct advantage, or think you’re taking a better approach. Instead, pick a handful of key, underserved demographics — whether it’s moms or adolescents or gamers or whomever — and serve the hell out of them. Based on my first impressions, that’s what the Nook Tablet has the potential to do.