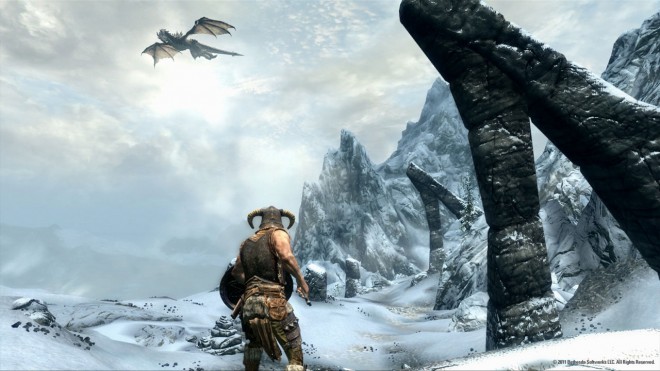 Dragon-slaying will be a routine part of your everyday life in The Elder Scrolls V: Skyrim.
Image courtesy Bethesda

You won’t have to pony up for horse armor again in Skyrim.

It might take you hundreds of hours to fully explore the massive world of upcoming role-playing game The Elder Scrolls V: Skyrim, but developer Bethesda plans to add even more. Todd Howard, the game’s director and producer, told Wired.com that downloadable content for the RPG, to be released Nov. 11 for Xbox 360, PlayStation 3 and PC, is already in the works.

Bethesda, Howard says, will follow the maxim of its previous game Fallout 3: Less is more.

“Very quick DLC might sell well, but that’s not our priority,” he said Monday in a phone interview with Wired.com.

“We’re not going to be doing a lot of it. Our high-level thinking is that there’ll be not as many [pieces of DLC], but they’ll be bigger and more substantial,” he said. “The goal overall is not necessarily to put out more content, but to make the game better.”

Bethesda was one of the first publishers to add substantial downloadable add-on content to its console games, when the very idea was fresh and untested. The company triggered some controversy with its 2006 game The Elder Scrolls IV: Oblivion when it asked players to pay about $3 for a piece of virtual horse armor.

Okay, that won’t happen again. But how substantial is “substantial”?

Howard says he doesn’t know if the downloadable content will be limited to new levels, or if the developer might use it to overhaul the game’s core features and mechanics, too.

“We could,” he says. “We don’t want to leave anything off the table.”

What Howard is sure of is that we shouldn’t expect to see this DLC anytime soon after launch, though we know that when it does launch, it will do so first on the Xbox 360.

“We’ll start hitting on everything after vacation,” Howard said. “We’ll take a break [after the game launches], see what consumers think of the game, then see which direction we want to go.”

Game|Life’s review of Skyrim will be published on Thursday morning.