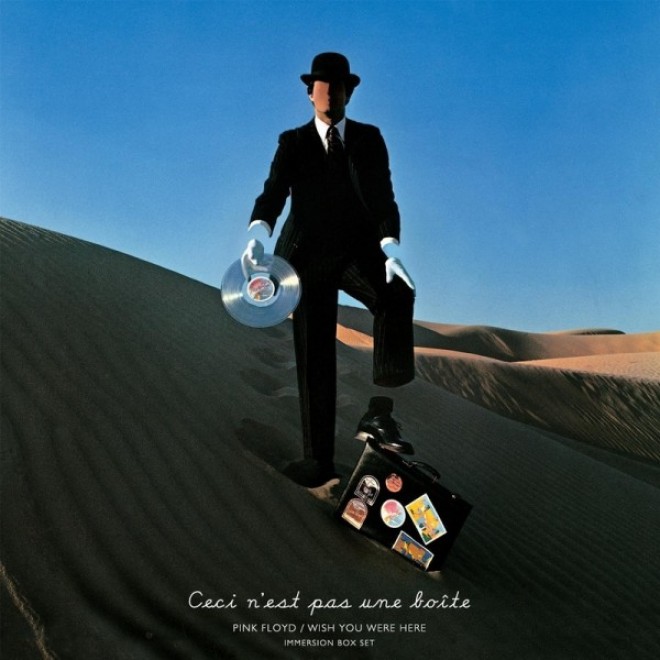 Drill deep into the dark sarcasm and desperate heart of Wish You Were Here, out Tuesday in a five-disc box set.

Come in here, dear readers, have a cigar. You’re going to go far….into the making of Pink Floyd’s timeless Wish You Were Here, should you walk away with Wired.com’s free copy of the 1975 classic’s Immersion Box Set.

Released Tuesday in an exhaustive five-disc set complete with commemorative books, mementos and more geek-friendly ephemera, the Wish You Were Here: Immersion Box Set is a bountiful head-trip down memory lane for Pink Floyd obsessives. And it’s a hyperreal journey, given that Wish You Were Here was a trip for the band as well: In the midst of recording its sonic love letter to reclusive founding member Syd Barrett — and hate letter to the music industry — the Floyd eerily found itself sitting across from an unrecognizable Barrett himself.

“It’s a good album,” drummer Nick Mason told Wired.com in September, when Pink Floyd’s Immersion campaign got underway with Dark Side of the Moon’s mammoth box.

“We should have just made life easier on ourselves by not going back to the studio so soon after Dark Side of the Moon,” he said. “We actually spent quite a lot of time floundering around. Once we did get it, it came together rather quickly. But there was quite a lot of pain before we managed to establish a way of working on it, and find the beginnings of the songs.”

So welcome to the machine, Floyd fans. Screen the reel below for a breakdown of the Wish You Were Here: Immersion Box Set. Then punch into the comments section and let us know where you think the release sits in the Pink Floyd pantheon. The geekiest bow-down scores Wired.com’s free copy, as well as A Foot In The Door: The Best Of Pink Floyd as a chaser.

Entries must be received by 12:01 a.m. Pacific on Nov. 21, 2011. Winner must live in the United States, which we admit is beyond ironic given that the band is English. But that’s just what the machine told us, so we welcomed it.