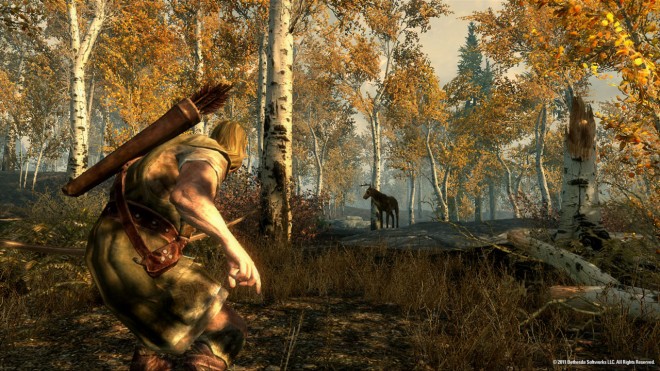 You'll be able to hunt down an infinite number of quests in The Elder Scrolls V: Skyrim.
Image courtesy Bethesda

If you like getting bang for your buck, The Elder Scrolls V: Skyrim will give you a nuclear blast.

You’ll never have to stop questing in the upcoming open-world role-playing game, to be released November 11 for Xbox 360, PC and PlayStation 3. Skyrim director Todd Howard told Wired.com in a phone interview Monday that the game will feature a never-ending stream of procedurally generated content, giving players an infinite number of things to do.

“The vibe of the game is that it’s something that you can play forever,” Howard said.

The game’s Radiant quest system randomly generates new tasks based on your progress in the game. An innkeeper might ask you to hunt for bandits in a place you haven’t found yet, or an aspiring alchemist could request that you collect 10 undiscovered flowers for his work. Howard claims that the options are endless.

In addition to these minor tasks, Howard says you’ll be able to do extra work for each of the game’s factions, like the Dark Brotherhood and the Thieves Guild. Once you complete the scripted quest lines for each group, you can go to their respective hubs and pick up randomly generated missions to steal gems or assassinate shopkeepers across Skyrim’s massive world.

Though some players might not love the idea of endlessly collecting groups of random ingredients, Howard says that Radiant quests play into one of the game’s major strengths: environmental storytelling. Skyrim’s world is sprinkled with secrets and minor bits of narrative that you’ll have to piece together as you explore, an aspect of game design that Howard says the team picked up while working on their last game, Fallout 3.

“With Fallout, it’s not as beautiful a world to everybody,” he said. “We had to find ways to make exploration of [a destroyed wasteland] interesting.”

For Skyrim, Howard says that Bethesda has learned a few new tricks and gotten better at the old ones. The most enjoyable part of the Radiant system won’t be completing quests, he says, it’ll be the things you discover along the way: bandit-infested fortresses, or a terrifying lighthouse.

“The world is probably the one thing that sets [Skyrim] apart from other games,” he said. “It feels really real for what it is … It’s just fun to explore.”

Wired.com’s full review of The Elder Scrolls V: Skyrim will be published on Thursday.