It’s a question with the deceptive simplicity of a zen koan: How does a hummingbird keep dry?

It’s not by staying out of the rain. Instead, as shown in a series of high-speed videos that reveal what’s hidden to the naked eye by time, hummingbirds shake themselves like dogs.

Of course, dogs don’t shake while balanced delicately in mid-air, flapping their wings 45 times per second.

“Everybody in the laboratory was astonished when we showed them the video,” said biologist Victor Ortega-Jimenez of the University of California, Berkeley. “It was an unexpected discovery.”

Ortega-Jimenez and fellow Berkeley animal flight specialist Robert Dudley, who describe the feat in a Nov. 8 Journal of the Royal Society Interface paper, first filmed the hummingbirds while investigating how they flew in rain.

At a glance, that might not seem like a pressing problem. But for a bird that weighs a few grams and lives on a razor-thin margin of bioenergetic error, it’s a life-or-death matter.

The Anna’s hummingbirds studied by Ortega-Jimenez and Dudley tip the scales at 4 grams, or just over an eighth of an ounce. To survive, they need to eat about five calories daily — which translates, from the dietary perspective of a 160-pound human, to more than 18,000 calories. Hummingbirds can’t afford to stay home every time it mists, but a few extra milligrams of water is a massive drag. 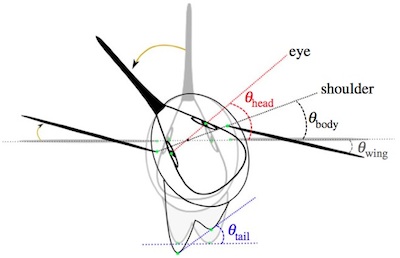 Diagram from above of a mid-air hummingbird shake. Image: Ortega-Jimenez & Dudley/Journal of the Royal Society Interface

(Should you ever want to know, the average angular displacement of a shaking Anna’s hummingbird wing in mid-air is 108 degrees, flapped 94 times per second. Its head twists some 202 degrees, or more than halfway round, 132 times per second. All this happens in precisely counterbalanced synchronization.)

The researchers also designed a machine to torque a single Anna’s hummingbird feather back and forth, capturing its water-shedding properties.

Ortega-Jimenez hopes other researchers will study how other birds keep dry, perhaps developing a taxonomy-wide cross-comparison of their techniques. In the meantime, more practical uses abound.

“The ‘whip’ effect of the flexible feather during counter-oscillation could be applied to improve the design of small flying vehicles,” said Ortega-Jimenez. It might also inspire alternative laundry dryers.

Video: High-speed video of a hummingbird shaking off water. (Victor Ortega-Jimenez/Journal of the Royal Society Interface)