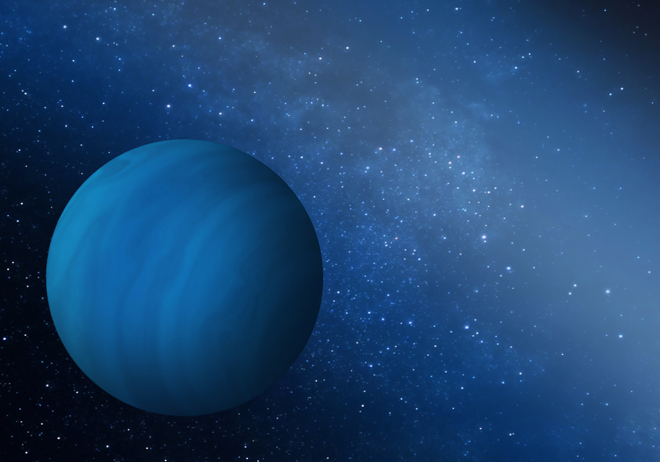 Astronomer David Nesvorny from the Southwest Research Institute in Texas believes that the solar system might have once contained a fifth gigantic planet, which was ejected deep into the galaxy in a moment of cosmic turmoil.

By looking at the population of the Kuiper belt — the icy-cold ring of asteroids beyond Neptune — and by studying the historical fingerprints left on the craters of the Moon, Nesvorny was able to piece together clues about our solar system’s adolescence.

He found that a dynamic instability, which occurred about 600 million years into the solar system’s life, greatly affected the orbit of our giant planets and scattered smaller bodies. Some moved into the Kuiper belt and others traveled inwards, marking their course as impacts on the Moon and planets.

But that scenario has a flaw. Slow changes in Jupiter’s orbit would have had a large effect on the orbits of the terrestrial planets. All hell would have broken lose, and the Earth could have collided with Mars or Venus. Something had to change.

“Colleagues suggested a clever way around this problem,” says Nesvorny in a press release. Instead of a slow movement, Jupiter’s orbit could have quickly changed, which would have altered the outer solar system but been less harmful to the inner planets.

Unfortunately, this too caused problems. Computer simulations, ran thousands of times, showed that Jupiter’s quick jump had the intended effect, but Uranus or Neptune was always knocked out of the solar system. “Something was clearly wrong,” Nesvorny explains.

So perhaps, instead, the early solar system could have had five giant planets instead of four. By plopping an additional giant planet with a mass similar to that of Uranus or Neptune the simulation worked as planned. Jupiter jumped into place, the inner planets remained unharmed and the outer planets stayed behind.

“The possibility that the solar system had more than four giant planets initially, and ejected some, appears to be conceivable in view of the recent discovery of a large number of free-floating planets in interstellar space, indicating the planet ejection process could be a common occurrence,” says Nesvorny in the release.