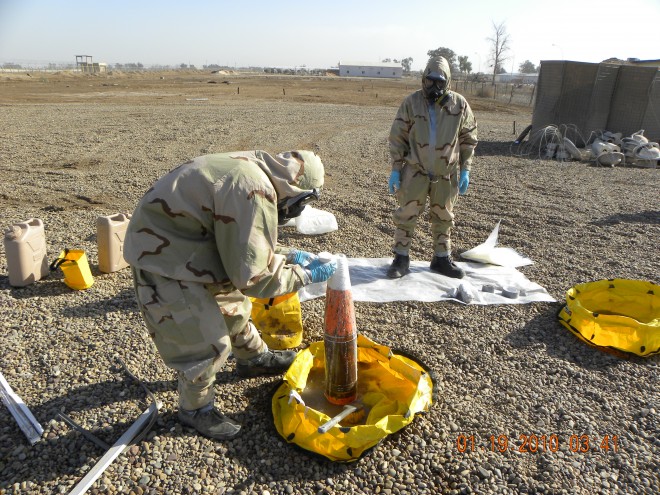 Author Chuck Pfarrer is taking flack over his account of the Osama bin Laden raid in his new revisionist history, SEAL Target Geronimo. But that’s overshadowed another big problem with the book: Pfarrer’s claims about Iraq’s weapons of mass destruction are absolutely bananas.

To read SEAL Target Geronimo is to get sucked into a vortex of WMD insanity. Pfarrer says that Saddam Hussein had dangerous, active chemical, biological and nuclear programs up until the day of his downfall. Worse, those weapons made it into the hands of Osama himself. Why didn’t you know about it? Because craven politicians and the lying media hid the truth about what U.S. military weapons experts uncovered.

Well, sorry, Charlie. I was one of those military experts in Iraq. I learned the full, underwhelming truth about Saddam’s programs because I was there to help the Iraqis settle the issue once and for all. And SEAL Target Geronimo’s claims are the literary equivalent of a smoking gun that could have been a mushroom cloud — a paranoid, evidence-free fantasy, fueled by ignorance.

Start with all that Iraqi WMD that U.S. forces found. Pfarrer gasps over an Explosive Ordnance Disposal unit’s 2003 discovery of an artillery shell filled with the nerve agent sarin, part of an early homemade bomb. To Pfarrer, that bomb would have “spread a mortal, invisible cloud over a dozen city blocks” where “death would have come quickly for ten thousand Iraqi civilians living near the airport and three thousand coalition troops stationed at nearby Camp Victory.” If two of those sarin-laced bombs went off in a crowded football stadium, it would have caused more casualties than “those suffered by the United States during the entire Vietnam War.” His emphasis.

Absolutely none of this is plausible. You’re talking about a piece of steel that needs to survive being fired out of an artillery piece, and then burst apart by explosives in order to disseminate the chemicals inside. Much of the chemical material is destroyed in the process. And it would take a lot of sarin to achieve any deadly effect. Saddam’s vicious gassing of the Kurds at Halabja in March 1988, for example, was a coordinated military campaign lasting for two days. During that time, the Iraqis murdered up to 5,000 people — nowhere near Pfarrer’s stadium scenario. An actual chemical artillery round might — might — kill dozens. Not thousands.

Yes, it’s true: U.S. troops found the remnants of chemical munitions in Iraq. But Pfarrer makes a conspiratorial mountain out of that molehill. Most amazingly, Pfarrer invents a scenario whereby these chemical rounds made their way to Osama’s Abbottabad hideout.

Basically, at the time of his death, bin Laden possessed some of Saddam’s hidden chemical weapons. His sources for this rather monumental claim, as best I can tell from reading the book, are … no one. He doesn’t cite any sources at all. Pfarrer’s book has no notations and no bibliography. A reader can’t dig any deeper to sort out what’s conjecture and what’s fact.

But let’s play along. Say al-Qaida did get its hands on those weapons. After years of exposure in the desert, those chemical rounds are generally in terrible shape. Their contents are severely degraded. They’d be WMD lemons. And yet those rusty, leaky artillery shells are portrayed in SEAL Target Geronimo as a direct threat to the heartland. Pfarrer’s apocalyptic football-stadium scenario? He imagines it occurring in Nebraska. Must be a Sooners fan.

Pfarrer also relies on WikiLeaks — which I haven’t checked, because the Defense Department tells me not to — for outlandish claims about Iraqi WMD finds. If there was any doubt, that’s where he really proves he doesn’t know what he’s talking about. I’ll go slowly so Pfarrer can follow along.

He writes, for instance, that chemical discoveries were so dangerous that the “top secret” Army Tech Escort Units had to be called in to deal with them. Sigh. It galls me to see this stuff mischaracterized, since I worked on it directly.

The Army’s Tech Escort Battalions do deal with situations like this. But these units are far from “top secret.” They belong to the Army’s 20th Support Command (CBRNE), where I used to work.

Tech Escort Units (TEU) consist of specially trained Chemical Biological Radiological Nuclear (CBRN) soldiers and explosives techs. They’re trained to deal with chemical remnants. Sometimes, like other military units, aspects of their work is classified. But Pfarrer is dead wrong to imply they’re some kind of super-secret covert action team. Or at least no one told me they were when I graduated from the Army Tech Escort School. (Well, I’m an honor graduate.)

Contrary to Pfarrer’s breathless language, TEU teams do important work — but it’s often mundane. In Iraq and elsewhere, missions typically begin when an EOD team discovers a munition that might contain deadly chemicals instead of conventional explosives. TEU are trained and equipped to safely recover the munitions, which, because of their state of decay, are often leaking. The teams pack and transport the deadly cargo to a remote location where it is destroyed. Yes, it’s dangerous. But these guys are pros, so it’s somewhat routine.

And those pros aren’t just American. In 2009, I deployed with a team devoted to helping the Iraqis come into compliance with WMD treaties. Specifically, my job was to create an Iraqi unit called the Chemical Defense Company (CDC) that would have capabilities similar to U.S. TEU teams for dealing with chemical remnants. It’s an obligation under the Chemical Weapons Convention. So along with a TEU unit and some other advisers, I helped the Iraqis man, train, and equip the CDC. There wasn’t anything really breathtaking or sexy about it — although I’m sure my reports would have looked cool to the uninitiated once published by WikiLeaks.

Pfarrer might not know what to make of his WikiLeaks. But he knows what he wants to do with them: suggest that what you heard about Iraq’s weapons in the media, and what politicians said about them, was a big cover-up. Pfarrer isn’t so clear about what that conspiracy was for. But it’s enough to ask leading questions to sow doubt about the official story. Could Saddam really have lost all these buried chemical weapons that U.S. and Iraqi explosives experts dug up?

Well, yeah. First, anyone who’s worked with Iraqis knows that their accounting methods can be, shall we say, lax. Second, we have the same problem in our country. We buried and dumped thousands of chemical munitions in an entirely haphazard manner all over the world. When they’re not dug up in the Korean ambassador’s backyard in D.C., clam fishermen off the East Coast are dredging them up. The same TEU teams that deal with this problem in Iraq deal with it at home. In fact, the Army’s Chemical Materials Agency has a whole directorate devoted to the safe recovery, storage, and destruction of all our chemical remnants.

I don’t know anything secret about the bin Laden raid and the truth of Pfarrer’s account of it. I wouldn’t talk about it if I did. But Pfarrer’s chapter on Iraqi WMD is so massively wrong I have to wonder what experts vetted it, as the press material claims. (Pfarrer’s publicist didn’t follow through on an interview offer, despite repeated requests.)

SEAL Team Geronimo is probably going to be a big seller. Pfarrer’s creds as a former SEAL will lead unsuspecting readers to interpret the book as the inside truth. It seems that nightmarish fantasies about Iraqi weapons of doom will outlast the war they inspired.

Read 3143 times
Published in News Technologique-Tech News
More in this category: « Solar System May Have Lost Fifth Giant Planet iOS 5.0.1: Breaking Reports Suggest Update Not a Battery-Life Fix for All »
back to top