Russian Mars Probe Will Likely Come Crashing Back to Earth 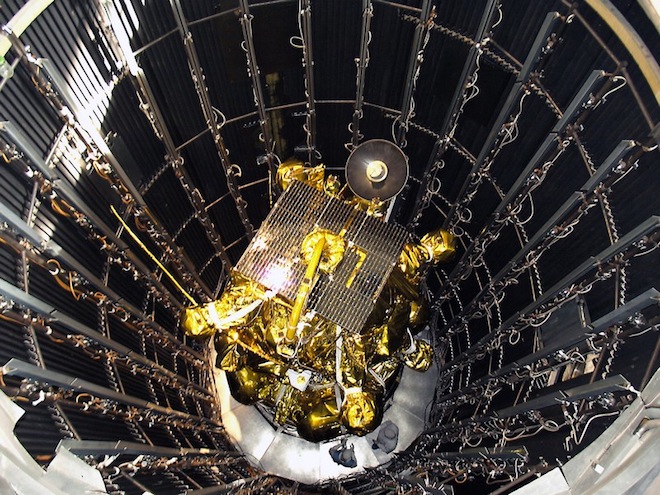 Things are looking grim for the Russian space agency’s Phobos-Grunt mission to Mars, with experts in the space industry calling the probability of rescue nearly zero.

The spacecraft has been stranded in low-Earth orbit following an engine failure almost immediately after launch on Nov. 8. Efforts to contact the probe have proved futile and the Pentagon’s NORAD has reportedly projected that the vehicle will reenter the Earth’s atmosphere on Nov. 26, the day after NASA’s Mars Science Laboratory is scheduled to launch. (Wired was unable to confirm this date with NORAD due to the federal holiday.)

It was hoped that Phobos-Grunt would be the first fully successful Russian mission to the Red Planet after a 50-year-long string of failures. It was set to land on Mars’ moon Phobos and return a soil sample from its surface.

The spacecraft is currently in a decaying orbit around Earth that should allow it to remain in space for at least a few weeks. During this time, Russian engineers will continue trying to contact the probe, hoping for a miracle.

In the event that no contact is established, the probe will soon fall back to Earth. The probable fall zone is currently very large – between 51.4 degrees N latitude and 51.4 degrees S latitude, which includes most of the U.S., part of Europe, all of Africa and Australia and virtually all of South America and Asia — and could prove dangerous if the spacecraft were to come down over a populated area.

While most of the 15-ton vehicle is expected to burn up in the atmosphere, its size and mass suggests that some debris would reach the Earth’s surface.

Read 2483 times
Published in News Technologique-Tech News
More in this category: « iOS 5.0.1: Breaking Reports Suggest Update Not a Battery-Life Fix for All New iPad App Puts Viewers Inside Immersive Video »
back to top