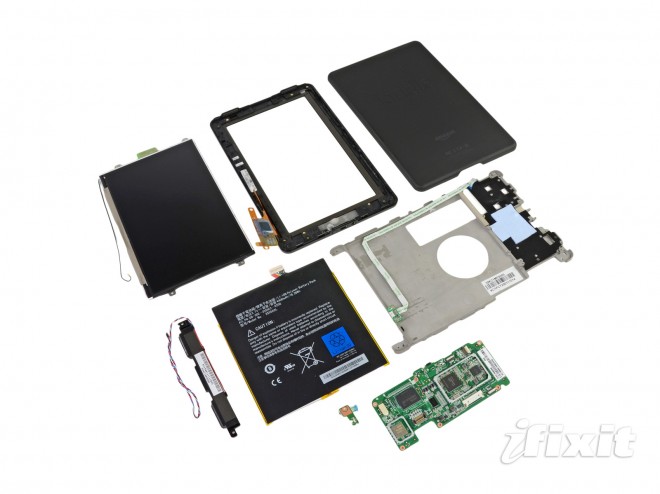 The Kindle Fire gets its guts laid out, and what do you know, it looks like a tablet. Image: iFixit

The guys at iFixit didn’t waste any time. A single day after the Amazon Kindle Fire goes on sale, and they’ve already ripped it apart to gawk at its insides.

They found that the Fire wasn’t difficult to take apart at all, and (surprise!) its insides aren’t too different from other tablets on the market. It uses simple components, and would be a breeze to repair.

If you’re in need of a refresher, the $200 Kindle Fire tablet features a 7-inch multi-touch display with 1024 x 600 resolution. It’s got a dual-core processor, 8 gigs of onboard storage, and runs a custom, Amazon-skinned version of Android 2.3, and is — so far — a huge hit with consumers and developers. After prying off the back, you can see the Fire's ginormous battery. Photo: iFixit

The Fire is .45 inches thick, which is a bit huskier than other popular tablets like the .34-inch-thick iPad 2. Popping open its casing (done using a guitar pick and iFixit’s “plastic opening tool”) was far easier than prying apart something like an iPod or other iDevice. And unlike recent teardown projects, the glass and display on the Kindle are not fused together, which is good news, but the glass panel is attached to the front panel assembly and requires a heat gun to pry it off.

Using a Philips #0 screwdriver and a spudger, the team was able to dig deeper into the hearth of the Fire (come on, I had to make at least one fire-related pun). They found a large 4.6-by-4.3-inch, 4400 mAh Lithium-ion battery that’s held in place with a dab of glue and a single connector. The Fire employs a number of different Texas Instruments chips, including a 1GHz Texas Instruments OMAP 4430 processor. 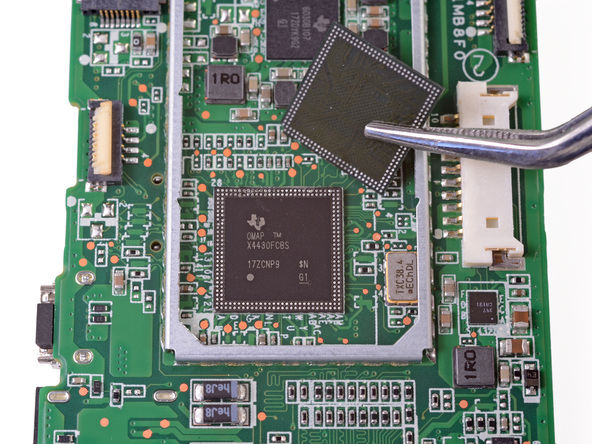 iFixit gave the Fire a super-easy-to-fix 8 out of 10 repairability rating. Hit up the link for the full step-by-step deconstruction.