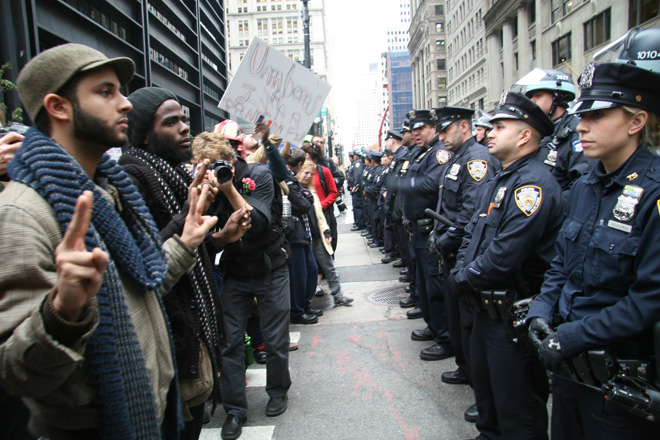 After a day of chants, debates and yelling at the police who evicted them from Zuccotti Square Tuesday, Occupy Wall Street protestors were overtaken by a wave of silence that rippled through the crowd at 5 p.m. as they learned they’d lost a court battle to rebuild the park.

Occupy Wall Street protestors had been hopeful all day that a state court would allow them to re-establish their two-month old encampment in Manhattan’s Zuccotti Park, which was destroyed 16 hours earlier by hundreds of police officers in a surprise morning raid ordered by Mayor Michael Bloomberg.

Instead, the court allowed the city’s new rules against structures and sleeping in the park to stand.

The false hopes deepened the impact of the court loss on Occupiers, who began living in the park near Wall Street in September in protest against an economic and political system that has benefitted the ultra-rich at the expense of the rest of society for decades.

The sidewalks around the park remained open to protestors, and after the shock of the ruling set in, the motley crew of protestors split along demographics. The young homeless settled in for sleep on the sidewalk on the west side of the park, while the seemingly unstoppable drum circle took to the sidewalk across from the park’s northern edge. 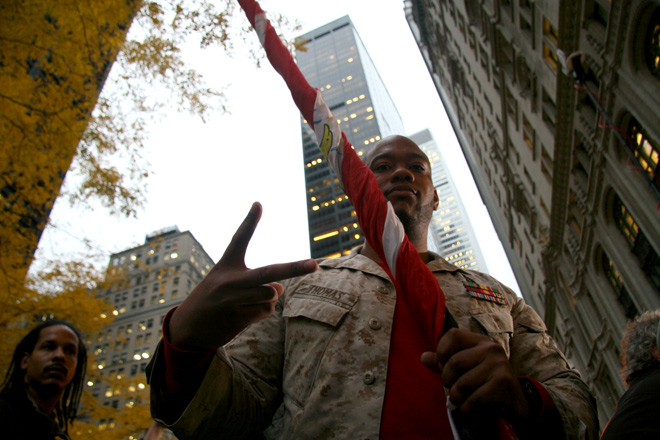 On the east side, a general assembly gathered to make decisions about how to proceed under the new rules.

Occupy remains determined not to fade away, despite the raid, the new rules and the imminent approach of winter.

“The whole world is watching,” said one protestor, in a message echoed out telephone-style to the rest of the General Assembly. “What we do in this space will inspire people everywhere.”

Tim Fitzgerald, an active member of Occupy’s logistics group, told Wired.com that the legal fight wasn’t over, either.

“We have really good lawyers and plan to appeal,” Fitzgerald said, showing off the red indentations in his wrists from the cuffs put on him that morning when he was arrested, in the kitchen, for trespassing and disorderly conduct.

At 6 p.m., the police began allowing protestors back in the park, which led, despite light rain, to a party, albeit one best described as a bit beleaguered.