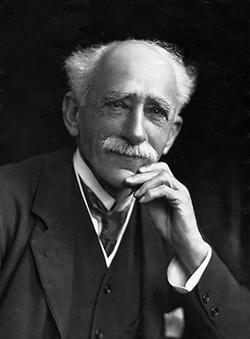 1904: British engineer John Ambrose Fleming invents and patents the thermionic valve, the first vacuum tube. With this advance, the age of modern wireless electronics is born.

Although the Supreme Court eventually invalidated Fleming’s U.S. patent — ruling that the technology he used for his invention was already known — he remains the acknowledged inventor of the vacuum tube, a diode (having two electrodes) that would have far-reaching applications. The tube was standard equipment in radio receivers, radar sets, early television sets and other forms of electronic communication for at least half a century, until it was replaced by solid-state electronics in the mid-20th century.

The principle of thermionic emission, essentially the transmission of a charged current using a heated conductor, was certainly well-understood before Fleming incorporated it into his tube. It was first reported in 1873, and a number of other engineers and physicists — including Thomas Edison — had experimented with it.

Fleming’s vacuum tube, however, represented a major breakthrough in the technology.

Fleming lived long enough to see the fruits of his labor literally save Britain during World War II. Radar sets using Fleming’s diodes proved decisive in the Battle of Britain, allowing a relatively small number of British fighter planes to effectively turn back the Luftwaffe’s onslaught against the home island.