The Twilight Issue: Why Geeks Should Get Behind Breaking Dawn 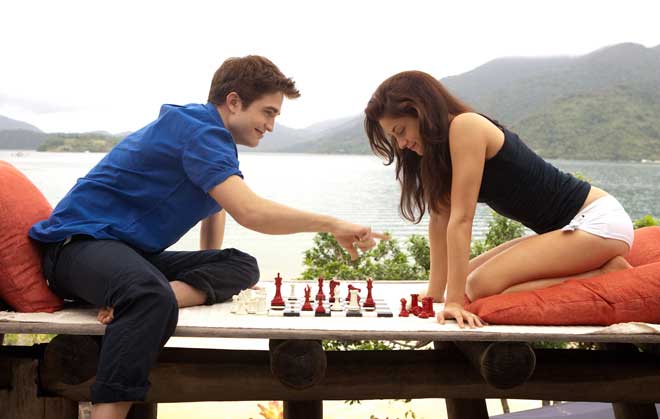 The Twilight Saga: Breaking Dawn — Part 1 is not for everyone. The movie’s plot is a little start-and-stop, a good portion of it won’t make sense to the uninitiated, its visual effects border on cartoonish, and — despite the best efforts of its cast — the characters are nearly impossible to relate to.

Which is to say, it’s a nerd movie if there ever was one. And geeks should get behind it.

Because, really, what’s more geeky than allowing someone to nerd out with something that not everyone understands? With the arrival of Breaking Dawn at midnight Thursday, we are reminded again of the obsessive nature of Twihards. There are fans occupying theater sidewalks awaiting the film’s premiere, copious merchandise tie-ins and the kind of online buzz that is already leading to $140 million opening-weekend predictions.

Remove Twilight from the above description and you could just as easily be talking about a Star Wars prequel (I could go further with this metaphor, but this is a Wired blog and I value my eyeteeth.)

Yet there is little support from the broader nerd community for the Twilight films. In fact, a bit of the reaction can be downright hostile. For example, when Harry Knowles at Ain’t It Cool News posts something as innocuous as a casting note and praise for director Bill Condon, the comments immediately devolve into varieties of “How the FUCK is this COOL?” The same is true when that moment of tension hits Comic-Con International each year as Twilight fans encounter folks in head-to-toe Cylon gear.

Breaking Dawn was made for a certain type of geek and it succeeds wildly at appealing to their needs.

But why? Is wearing a Team Edward shirt so much different from donning a vintage X-Men tee? Does it take much more obsessive attention to detail to memorize the age at which Edward was turned into a vampire than it does to know what triggers Wolverine’s berserker rage? You don’t have to care what the details are to appreciate someone’s love of knowing them.

It’s also the most sci-fi film in the series, which usually lives in the realm of the supernatural, so far. Picking up where Eclipse left off, the film starts with the wedding of Edward Cullen (played by Robert Pattinson) and Bella Swan (Kristen Stewart — the Carrie Fisher of her franchise down to the commitment to her source material and hair braids. OK, I’m done).

It goes on to the romantic honeymoon where, yes, hot, bed-breaking sex is had, many times. Bella then inexplicably becomes pregnant even though it shouldn’t be possible according to whatever vampire myth Stephenie Meyer concocted when she wrote the books on which the films are based.

Then things get freaky. Bella begins wasting away as the part-vampire being growing in her womb takes over her body, forcing her to drink human blood through a straw to feed her offspring. The creature nearly kills Bella on its way out, breaking bones and going all apeshit (yes, it’s very Alien). Once Edward removes the child, Bella is near death, so her vamp husband stabs her in the heart, Pulp Fiction-style, with a syringe full of his venom in order to change her into a vampire and save her life.

Cue the (cheesy) animations of vampire venom coursing through her veins and into her heart. (This, for the record, is about as far as any of the films have gone into explaining how vampires “work” in the Twilight canon, physiologically speaking. Pseudo-science!)

Read 3553 times
Published in News Technologique-Tech News
More in this category: « Martian Sand Dunes Caught in Motion Analysis: Internet Blacklist Bill Is Roadmap to 'the End' of the Internet »
back to top