Analysis: Internet Blacklist Bill Is Roadmap to 'the End' of the Internet 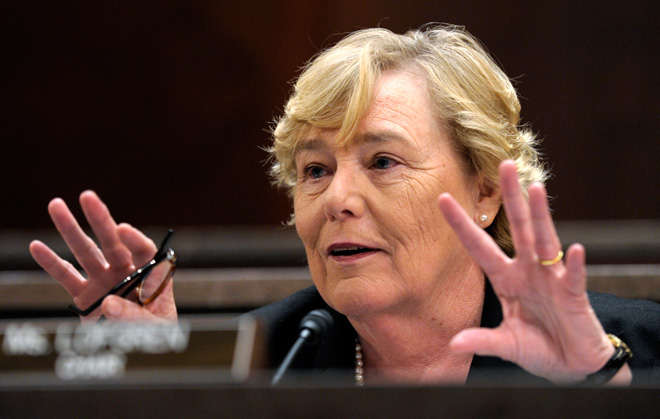 Rep. Zoe Lofgren (D-Calif.) says passage of the Stop Online Piracy Act "would mean the end of the internet as we know it." Photo: AP

The rhetoric on both sides of the debate concerning the Stop Online Piracy Act almost peaked when Rep. Zoe Lofgren (D-Calif.) said the House proposal “would mean the end of the internet as we know it.”

Weeks after the Silicon Valley representative’s comments, the vitriol reached a crescendo Wednesday during the measure’s first hearing before the House Judiciary Committee, when Registrar of Copyrights Maria Pallante testified the U.S. copyright system would “fail” if Congress does not take action.

“The rhetoric around this bill is over the top,” said Rep. Howard Berman, the California Democrat whose district includes Hollywood.

Lofgren’s statements, however, aren’t that farfetched. Not if you actually read the bill.

Lofgren’s words do not mean she favors online piracy or the online distribution of counterfeited drugs.

Lofgren, her Silicon Valley constituents and civil rights groups are concerned about what’s actually contained inside the four corners of the 79-page proposal. It amounts to the holy grail of intellectual-property enforcement that the recording industry, movie studios and their union and guild workforces have been clamoring for since the George W. Bush administration: The bill grants rights holders the unfettered power to effectively kill websites they believe are dedicated to infringing activities — without needing to get a judge’s permission.

The measure would also boost the government’s authority to disrupt and shutter “rogue” websites that hawk or host trademark- and copyright-infringing products, including allowing the government to order sites removed from search engines. The bill allows the Justice Department for the first time to obtain court orders demanding American ISPs to stop rendering the DNS for a particular website, a feature even the bill’s main backer conceded Wednesday was problematic for a host of reasons, including that it’s a threat to a secure and uniform internet.

Most distressing, however, the measure paves the way for private rights holders to easily cut off advertising and banking transactions to what the bill’s backers call “rogue” websites, without court intervention.

And therein rests a major problem. The definition of a “rogue site” is so vague that the law is ripe for rights holders to abuse, to cut off the financial pipelines of websites they view as designed to “enable” or “facilitate infringement.” The bill also allows rights holders to target websites that turn a blind eye to avoid knowing their site is used for infringement. File-sharing sites or cyberlockers are also included.

The list of such sites that could be considered “rogue” is legion. They range from the notorious Pirate Bay hub for all things free, to cyberlockers like DropBox or Box.net. Sites filled with user-generated content, such as YouTube, aren’t immune either because they generally don’t actively police their sites for infringement.

“We have a lot of concerns that it sweeps in legitimate sites,” Katherine Oyama, Google’s policy council, testified during the House hearing Wednesday.

Notwithstanding Google’s vested interests in the debate, we believe the measure simply seeds too much unfettered control to rights holders to decide what web sites can stay, and which ones must be disappeared from the internet.

We don’t dispute that rampant piracy of music, movies, software, and the sale of counterfeited drugs runs rampant on the internet. Clearly, the internet’s openness is often abused by many seeking a free ride.

But granting the rights holders the power to break the knees of sites they believe are infringing is equally ripe for abuse.

Perhaps the most telling example is Universal Music. The record label claims that it can send a takedown notice under the Digital Millennium Copyright Act to YouTube without even analyzing whether a video is making a fair use of Universal’s copyright.

If Universal believes it has that right under the current law, what’s there to stop it from demanding credit-card companies and ad networks to block their affiliation with Box.net because it allows users 50 gigs of free storage to share any copyrighted works they want without permission from the rights holder.

Again, SOPA allows for this, without judicial intervention. Credit-card companies and ad networks that continue working with the allegedly rogue website can be held liable for contributing to the infringement.

Let’s not forget that Viacom is suing YouTube for $1 billion, saying its business model will “completely destroy the value of many copyrighted creations.”

And if you don’t believe the banks would willfully obey such an order from private rights holders without blinking an eye, consider WikiLeaks, which is nearly defunct because institutions like Bank of America, PayPal, MasterCard, Visa and others stopped processing donation payments to it. They did so because the secret-spilling site began releasing thousands of secret, U.S. diplomatic cables last year. No judge ordered these banks to take such action, and WikiLeaks has never been charged with a crime in the United States.

There’s some hope the bill will be stopped, in no small part due to a widespread internet campaign to stop the bill.

House Minority Leader Nancy Pelosi (D-California) tweeted Thursday: “Need to find a better solution.” Rep. Darrell Issa (R-California), was quoted in the Hill newspaper Thursday that it has no chance of passage.

Hollywood may hate piracy, but Netflix, Pandora, Spotify, Rdio, and the Amazon Fire tablet make it clear that people will pay for digital content online, despite the existence of piracy sites and easy services to share copyrighted content with friends and strangers.

The internet is in the midst of an innovation boom that’s only going to keep going thanks to amazing economies of scale, an open network and a light regulatory environment. Destroying that by creating an ineffective Great Firewall of Hollywood hardly seems like smart public policy.

Read 3026 times
Published in News Technologique-Tech News
More in this category: « The Twilight Issue: Why Geeks Should Get Behind Breaking Dawn Video: NYPD Rallies to Keep Occupy Wall Street Out of the NYSE »
back to top