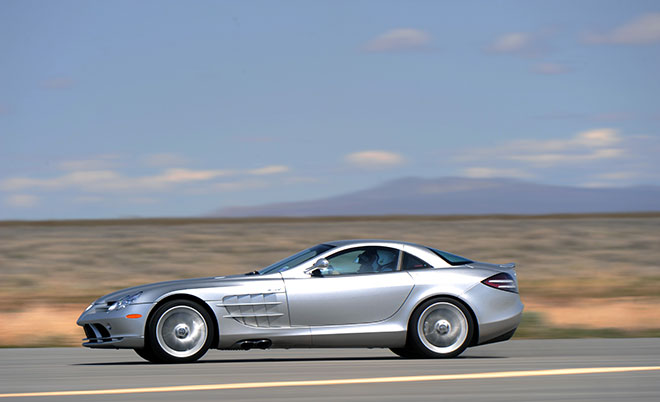 As automotive milestones go, hitting 200 mph in a car is more elusive than you might think.

Just 25 years ago, even the most offensively priced, outrageously sculpted supercars were incapable of such speed. It wasn’t until 1987 that Ferrari crossed that Rubicon with the stunning F40. But even that is open to debate, because as late as February 1991, the fastest production car tested by Car & Driver was an F40 that could muster a mere 197 mph.

To put 200 mph in perspective, at that speed you’re covering 293 feet per second. It’s the kind of velocity rarely seen on a track and virtually unattainable by anything found in showrooms, mostly because speed-sapping aerodynamic drag increases exponentially as you accelerate. In other words, the faster you go, the more power you need to go even faster. Case in point, the utterly bonkers Bugatti Veyron 16.4 Super Sport. The world’s fastest production car needs a mere 270 horsepower or so to cruise at 155 mph. But to pass the double century en route to its top speed of 256 mph, most of its 1,001 ponies are unleashed.

And yet, you don’t need a seven-figure Bugatti to hit 200. Hell — you can drop $111,000 or so on a Corvette ZR1 and hit 205. Still, even that is beyond the means of the 99 percent. But an automotive wish-fulfillment outfit called World Class Driving will let anyone with $4,995 experience the kind of speed only a guy like Sebastian Vettel typically sees.

I joined the high-speed thrill ride at Mojave Air & Space Port in California’s high desert. To verify Vmax — automotive speedos can be prone to error — I tucked a Garmin zumo 660 GPS in my pocket. 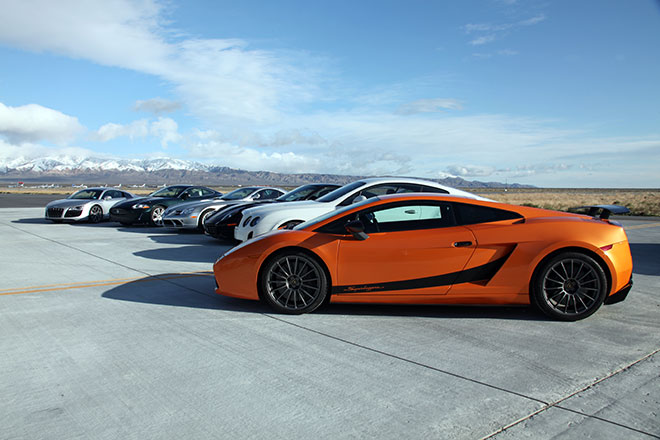 The guys at World Class Driving assembled an impressive coterie of cars, any one of them enough to get the most blasé auto aficionado worked up. Not all of them are quick enough to get me to 200 mph, but they were helpful for honing the skills I’d need to get there.

The cars, in ascending order of value:

The British 2+2 is the entry-level offering here, a nod to Jaguar’s marketing connection to World Class Driving. It’s a nice enough luxury coupe, but pales in comparison to the rest of the fleet. Still, with 510 horsepower on tap it’s got a potent bang-for-buck ratio and allows you appreciate how much more insane the rest of the cars are.

Ingolstadt’s spiritual successor to the legendary Acura NSX features a lively 5.2-liter V10; stomp it, and you’ll hit 60 mph in 3.7 seconds. But the engine isn’t potent enough to push you past 196 mph. Need more speed? Step up to the R8’s sibling, the Lamborghini Gallardo Superleggera.

This car looks mean, because it is. The feather-light (for a Lambo) rocket features loads of carbon-fiber and polycarbonate, along with a 570-horsepower V10 that absolutely screams. Sixty mph comes and goes in 3.4 seconds, and you’ll see 202 mph if you’ve got a long enough road. Mercy!

Bentleys are almost absurd, because nothing weighing 2.5 tons should be this fast. But you can make anything fly if you give it a big enough engine. Beneath its vented hood, the Supersports packs a massive twin-turbo 6.0-liter 12-cylinder engine with 621 horsepower and a thundering 590 lb-ft of torque. Maximum velocity is 204 mph – in a car weighing 4,940 pounds.

This curvaceous Speed Racer lookalike is designed more for the open road than the track, but it’s still a Ferrari. It will take you to 205 mph in total luxury. Yes, it costs as much as a starter home, but does anything sound so spine-tingling as a 6.0-liter V12 at full throttle? No.

This marriage of Mercedes luxury and McLaren racing is enough to make a gearhead’s heart skip a beat. Or 12. The hand-built 617-horsepower supercharged V8 engine is nestled into a carbon fiber monocoque and doors that open like wings. Oh sure, it’s got an automatic gearbox and notoriously touchy carbon-ceramic brakes. But it’s a freakin’ McLaren, and it’ll take you to 206 mph.

Read 3264 times
Published in News Technologique-Tech News
More in this category: « Video: NYPD Rallies to Keep Occupy Wall Street Out of the NYSE Honda's Gassy Civic Wins Green Car of the Year »
back to top