An Apple patent describes a way to protect a glass-backed device from the dangers of falling. Image: Patently Apple

Apple is a powerhouse of ingenuity, patenting ideas as soon as an engineer can scratch them down on paper (or iPad). Around three dozen Apple patents made their way through the U.S. Patent and Trademark Office this week alone. Here we share three of the most notable — one helps prevent cracked cover glass, another would deliver power to multiple devices with just a single adapter, and a third is a far-reaching location-based services patent that could keep Apple’s competitors on their toes.

First off, Apple has come up with a solution for keeping the glass on the back of your iDevice from breaking in the event of a fall. Obviously, the simplest solution would be to avoid glass screens altogether, but if glass is going to stay, it should be made more resilient.

Apple dreamed up a tunable shock mount that would sit between the glass and the body of the device. This shock mount would inflate when the device’s accelerometer senses that the phone or tablet is falling. An actuator within the device would suck in the cover glass as it accelerates toward earth, protecting it from damage. This technology could also be used to provide a water-tight seal.

The patent also describes using alumino silicate glass, better known as Gorilla Glass, instead of normal glass. Gorilla Glass is already used in the iPhone 4 and 4S. Future cover glass could be chemically treated in a solution including potassium to help strengthen it further. As K+ ions replace Na+ ions on the surface and edges of the glass, the glass would have higher compression thresholds in those areas, making it less susceptible to cracking. 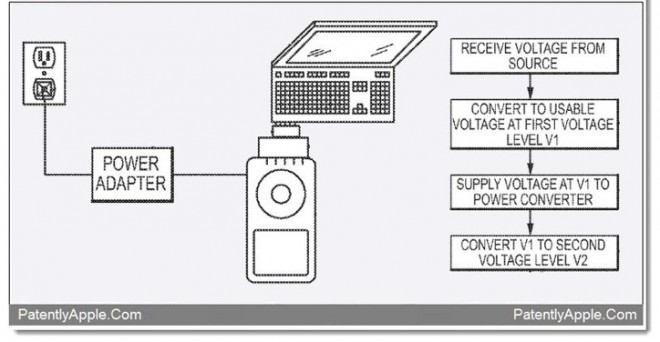 Next up, Apple proposed an intelligent power adapter that could detect the varied power needs of different devices, and service them simultaneously.

Today’s power adapters typically convert AC current from a wall outlet to a single DC current that can be fed to your device. Because different devices have different power needs, you currently need a different cable for each new gadget you use. (Well, that’s the main reason. If power cords and adapters were universally interchangeable, manufacturers wouldn’t be able to reap additional revenue when these accessories eventually need to be replaced.)

Apple’s patent details an adapter that would have multiple, daisy-chained DC-to-DC converters (either in the adapter itself, or the cord or a connector), supplying power to more than one device. Alternatively, the adapter would have a relay that dynamically controls the power delivered to a device, and would only deliver juice to compatible devices.

Read 4583 times
Published in News Technologique-Tech News
More in this category: « How Many Neutrinos Does It Take to Screw Up Einstein? When Whales Walked in Egypt »
back to top