When Whales Walked in Egypt 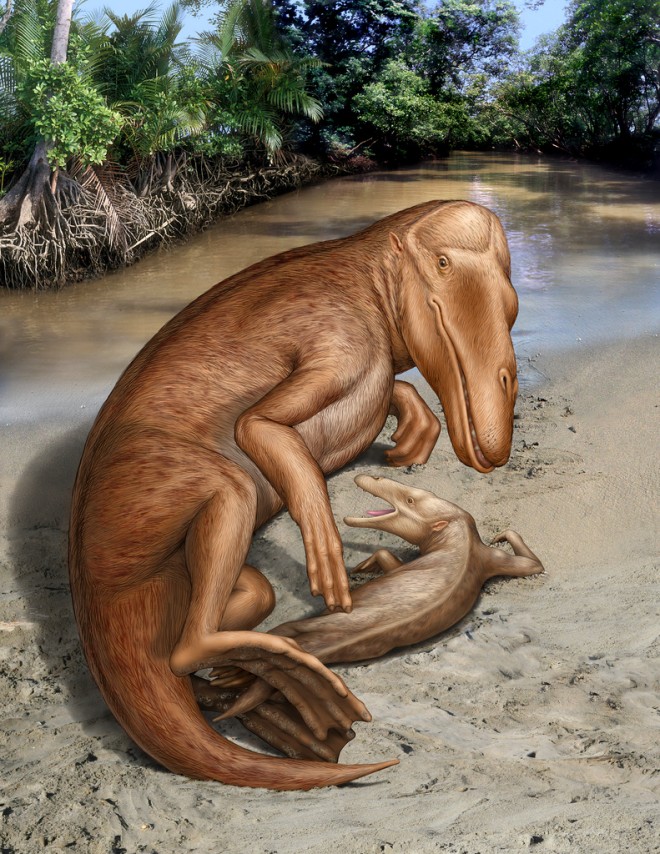 If the German paleontologist Eberhard Fraas is remembered for anything, his efforts to discover and describe the impressive dinosaurs of Tanzania’s Tendaguru beds must be at the top of the list. Thanks to a tip about the site from local mining engineer Bernhard Wilhelm Sattler, in 1907 Fraas began to remove impressive Jurassic dinosaurs simultaneously strange and familiar. The site was Africa’s own Late Jurassic graveyard — one full of spectacular creatures that seemed quite similar to Brachiosaurus, Allosaurus, Stegosaurus, and other dinosaurian celebrities found in North America’s ever-productive Morrison Formation. Fraas was delighted to find such a wonderful place –- the dinosaur bones “spoke in an eloquent language of the extinct primeval world”, he later wrote –- and the imposing Giraffatitan which stands in the Museum für Naturkunde in Berlin is a reconstructed testament to Fraas’ efforts.

But Fraas was not solely focused on dinosaurs during his career. Several years before his journey to Tendaguru, Fraas described a peculiar creature that –- had it only been slightly more complete –- could have quickly closed a gap in our understanding of one of the greatest transitions in evolutionary history. Fraas called the animal Protocetus. It was one of the very earliest whales. 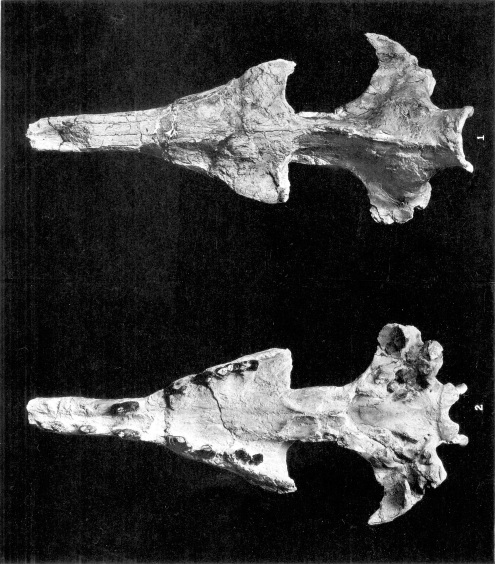 The skull of Protocetus atavus as seen from above (top) and below (bottom). From Kellogg, 1936.

There wasn’t very much left of the original Protocetus specimen. Found in limestone deposits created on the floor of a 45-million-year-old sea where Cairo, Egypt, now sits, the archaic cetacean was represented by a nearly complete skull and a series of vertebrae from the neck down to the hip. No parts of the limbs were found.

The discovery of this creature was celebrated by other naturalists as a confirmation that whales had evolved from terrestrial, carnivorous ancestors. The long jaws of Protocetus were set with pointed, conical teeth near the front and large shearing teeth toward the back, and in a short review of Fraas’ work in Nature fellow naturalist “R.L.” –- who I would presume was Richard Lydekker –- concluded that Protocetus and another whale Fraas named Mesocetus were “terrestrial animals in course of modification into purely aquatic ones.” Contrary to the opinion of Fraas –- that such creatures belonged to a different evolutionary lineage than true whales -– R.L. affirmed that his German colleague’s discovery actually strengthened the link between a group of archaic mammalian carnivores called creodonts on land and previously known early whales such as Basilosaurus.

The connection between Protocetus and land-dwelling carnivores rested almost entirely on two lines of argument. Whales absolutely must have originated from a terrestrial ancestor, and their sharp, differentiated teeth indicated that they evolved from a land-based predator with a dental toolkit of incisors, canines, premolars, and molars. But no one knew what the limbs of Protocetus looked like. Only the skull and parts of the spinal column had been found.

Naturalists had not added very much to the known skeletal remains of Protocetus by the time whale expert Remington Kellogg inventoried the known specimens of early whales in 1936. As a result of this lack of information and the resemblance between Protocetus and fully aquatic fossil whales, Fraas’ creature was also cast as a sea-dwelling mammal that was too late in the evolutionary transition to explain how whales became adapted to life in the water. “In Protocetus the transition to life in the water is certainly far advanced,” Kellogg wrote, and therefore this animal could not have been just a few generations from its landlubber ancestors. That such an aquatically adapted whale was the direct descendant of a terrestrial genus of mammal was “inconceivable,” and to Kellogg this indicated that the major transition from land to water must have occurred during some much earlier time. Maybe, Kellogg speculated, whales entered the water right as the great plesiosaurs, mosasaurs, and other marine reptiles of the Mesozoic were on their way out.

Kellogg was right about an earlier origin for whales, even if his hypothetical date was too far back in time. Starting with the description of Pakicetus in 1981, paleontologists began reporting on a wealth of early whales found in a geological swath from Egypt to India in strata spanning approximately 55 to 35 million years ago. A major gap in our understanding of whale evolutionary history was rapidly filled in, and by 2001 a confluence of genetic and anatomical studies confirmed that whales are highly modified hoofed mammals called artiodactyls. Even better, the fossil discoveries documented a branching radiation of amphibious whales that once lived at the water’s edge. There was not a lonely, single line of descent from Pakicetus through Ambulocetus, Rodhocetus, and Basilosaurus, but instead  an array of bizarre cetaceans –- some of which belonged to the ancestral lineage for modern whales, and others not.

Among these varied groups were archaic whales called protocetids after Fraas’ creature. They have to be some of the strangest creatures to have ever lived on this planet. Discoveries of these whales since the days of Fraas and Kellogg have revealed that these whales had long skulls which retained differentiated teeth, and their limbs could still support these animals on land. Generally, though, these whales were far more aquatic than terrestrial –- their hands and feet became flattened for propulsion and steering, and their spinal columns were becoming increasingly modified to allow for the undulating, up-and-down method of propulsion that characterizes whales today. In fact, these whales were so well-suited to life at sea that they were the first known group to travel to other continents. Protocetids are not only found in Pakistan and Egypt, but several genera such as Georgiacetus have been found in the southeastern United States. While many -– if not most -– protocetids could still trundle about on land, they were expert swimmers who could cross seas and represent a key stage in early whale evolution.

I can’t help but wonder how the history of science would have been altered had Fraas’ Protocetus included parts of the hips and limbs. Would he and other naturalists have recognized the animal as possessing transitional features between terrestrial mammals and later whales? Or would the paleontologists of the time place Protocetus on what has often been unfortunately called a “side branch” -– a freak with no connection to modern creatures. We can never know, but, in the context of a discovery announced just this month, it is not altogether surprising that some of the most critical aspects of Protocetus were missing.

Paleontologist Philip Gingerich is one of the most prominent researchers behind our present understanding of whale evolution. Among other contributions, Gingerich initially described Pakicetus with colleague Donald Russell, and has since named a number of other whales. The latest on the list is Aegyptocetus tarfa -– a whale much like Protocetus, and one that nearly wound up as a countertop.

Marbleized limestone is beautiful rock, and fossils are regularly found in slabs that have been cut and polished for airport floors, university bathroom stalls, and kitchen countertops. You can find bits of crinoids, ammonites, and other sea creatures in architecture if you know what to look for. Much larger creatures turn up from time to time, too. Earlier this year a marine crocodile dubbed Neptunidraco was described from several slabs of limestone that had been sliced up for decorative purposes, and even Protocetus itself was found in a commercial limestone quarry. Aegyptocetus, too, was accidentally discovered as a byproduct of commercial quarrying operations. The whale was discovered when workers in Italy sliced a block of limestone from the vicinity of Minya, Egypt, into six slabs, each showing a different cross section of the fossil cetacean.  Fortunately, those who found the fossil contacted the Museo di Storia Naturale e del Territorio at the University of Pisa and the fossil was saved for study. The details about the creature have just been published in the Journal of Vertebrate Paleontology. 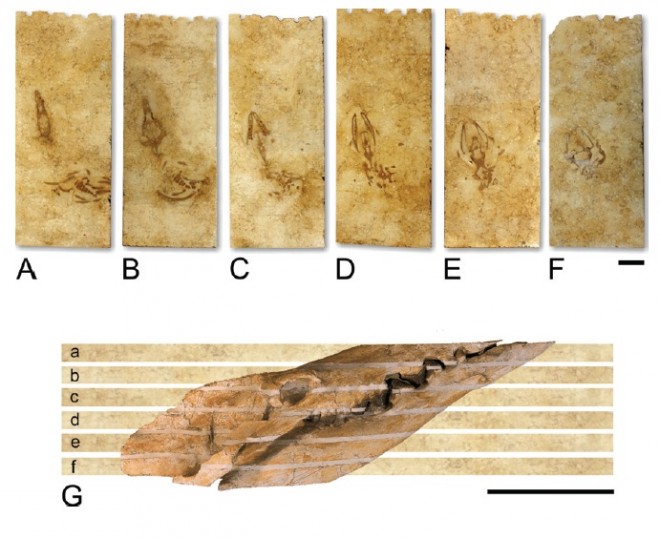 The limestone slabs containing Aegyptocetus, arranged side by side in the top row and stacked vertically in the bottom row. Each slab is a cross section through the partial skeleton. From Bianucci and Gingerich, 2011.

Within the big picture of whale evolution, Aegyptocetus is a roughly 40-million-year-old protocerid. This was a whale that possessed a mosaic of features which underscored its aquatic abilities but also retained ties to the land. While peculiarities of the whale’s lower jaw hint that Aegyptocetus possessed a more refined sense of underwater hearing than earlier cetaceans such as Pakicetus, for example, Gingerich and co-author Giovanni Bianucci suggest that the preservation of delicate bones in the snout related to olfaction -– called turbinates -– indicate that Aegyptocetus could still pick out pheromones or other sorts of chemical communication while on land. (This sense of smell would have been useless underwater since Aegyptocetus would have held its breath when submerged and therefore could not smell anything.) There is no indication whether Aegyptocetus was ancestral to any other whales, or even modern whales. The significance of the animal is that the whale possessed a suite of transitional features which fill out our understanding of how the senses of whales became altered as the lineage became increasingly aquatic.

But it was the taphonomic details of the new study which reminded me of Fraas’ discovery of over a century ago. Something similar appears to have happened to both animals between their death and burial in the prehistoric Egyptian ocean. While the remains of Aegyptocetus were relatively well preserved and had not been distorted, the skeleton only consisted of a nearly complete skull, a number of vertebrae from the neck and upper back, and a collection of ribs. The tail, hips, and limbs were missing. Fraas’ Protocetus was discovered in a similar, incomplete state.

Was there some common factor which caused both Aegyptocetus and Fraas’ Protocetus to be stripped down to the spine and skull? Maybe. In their paper Bianucci and Gingerich point out that many protocetid whales are often found without limbs, and scavengers of the dead whales would appear to be the most likely cause. After the prehistoric whales died, gases from decomposition built up in their bodies and thus created stinky, floating lumps of carrion. How could a scavenger resist? Sharks and other scavengers probably fed on the buoyant carcass of Aegyptocetus, and, as decomposition took its course, parts of the body rotted off and fell on the seafloor to create a trail of bones and soft tissues. The portion that was found and studied was encrusted by barnacles for a time before final burial, as well –- a find that underscores how no body goes unexploited on the seafloor.

The “bloat and float” hypothesis is a commonly recognized and widely applied scenario for the way prehistoric vertebrates came to be jumbled up at the bottoms of seas, lakes, and other bodies of water, but in the case of Aegyptocetus there is a line of additional, positive evidence. A few of the ribs on the left side of the body show toothmarks made by a prehistoric shark. Whether the shark bit down at the time of death or after is impossible to say -– since there is no sign of healing, we simply know that the whale either died after the hypothetical attack or was already dead. Given the loss of limbs and other parts, though, I would think that the shark tore out a chunk of whale meat after the cetacean was already dead. Perhaps most of the fleshy parts were already gone, and this particular shark sawed off some of the remaining soft tissue which still clung to the body. Short of very precisely-honed time travel, we will never know for sure, but I have to wonder how many other whales show similar signs of damage. We know that modern whales are often a boon for sharks and other scavengers, and even host entirely communities of organisms in what marine biologists call “whalefalls.” These modern interactions are only continuations of cycles of life and death that have been going on for tens of millions of years.

[For another perspective on Aegyptocetus, see Ed Yong's post at Not Exactly Rocket Science]