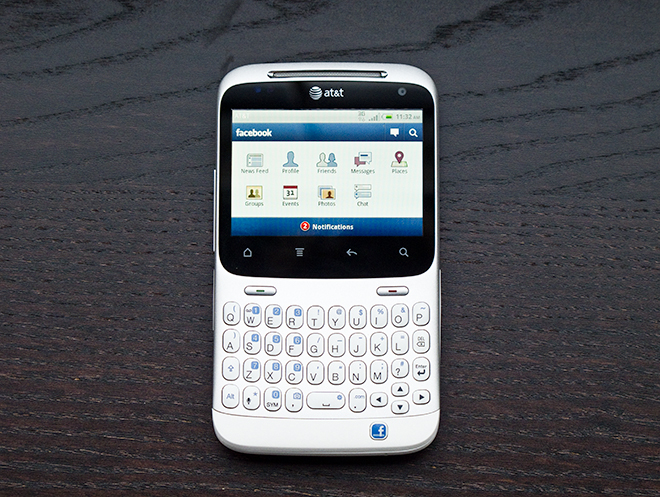 HTC and Facebook are reportedly working on a Facebook phone, according to a report. The HTC Status (above) was the first phone to incorporate a Facebook button in its hardware. Photo: Jon Snyder/Wired.com

Be warned: In 2012, your Facebook friend activity ticker could go insane — that is, if Facebook is indeed working on an actual “Facebook phone,” as reported Monday by AllThingsD.

According to AllThingsD sources, Facebook is working with Taiwanese phone manufacturer HTC on the purported phone, which would run “on a modified version of Android” that Facebook has “tweaked heavily” to integrate its social media platform with the device.

Seriously, think of all the status updates.

This isn’t the first HTC/Facebook pairing we’ve seen. Earlier this year, the smartphone manufacturer released its HTC Status (pictured above), an Android-powered device with a built-in Facebook button that lets users immediately update their social media statuses. After a lukewarm reception and lackluster sales, the Status is generally considered a flop.

This rumored HTC/Facebook pairing, however, sounds like a much deeper collaboration — far beyond the inclusion of a mere extra button. AllThingsD says the project — code named “Buffy” (yes, really) — will include HTML5 support for applications, a move long espoused by Facebook CTO Bret Taylor as the future of mobile development for the company.

Emphasis on HTML5 is interesting in and of itself. To wit: Zynga, one of the biggest developers of games for the Facebook platform, mostly produces Flash-based games. But Flash will soon be extinct on Android mobile browsers, and won’t ever be supported by iOS devices. The demise of Flash will inevitably push developers like Zynga to create more HTML5-based games. Interestingly enough, the company released three HTML5-based titles in November alone.

While Facebook did not immediately respond to Wired.com’s requests for comment, the company previously provided AllThingsD with the following statement:

Our mobile strategy is simple: We think every mobile device is better if it is deeply social. We’re working across the entire mobile industry; with operators, hardware manufacturers, OS providers, and application developers to bring powerful social experiences to more people around the world.

Facebook has long denied working on any official Facebook phone hardware, instead stressing close ties between its platform and existing device operators and manufacturers. While AllThingsD provides no hard details on Project “Buffy,” its report seems to be the closest we’ve heard on a true “Facebook Phone” yet.

Read 3604 times
Published in News Technologique-Tech News
More in this category: « Meg Whitman: Thailand Floods to Send DIY Server Makers Back to HP Blame Your Crooked Teeth on Early Farmers »
back to top