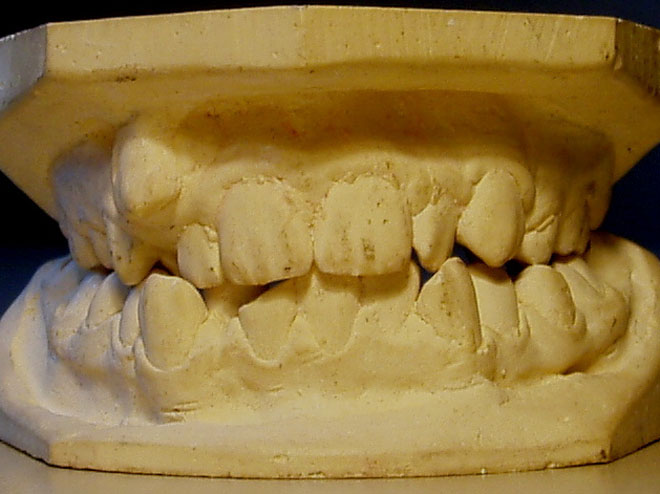 When humans turned from hunting and gathering to farming some 10,000 years ago, they set our species on the road to civilization. Agricultural surpluses led to division of labor, the rise of cities, and technological innovation. But civilization has had both its blessings and its curses. One downside of farming, a new study demonstrates, was a shortening of the human jaw that has left precious little room for our teeth and sends many of us to an orthodontist’s chair.

Although all living humans belong to one species, Homo sapiens, there are recognizable differences in the shapes of our skulls and faces across the world. In recent years, anthropologists have concluded that most of this geographic variation in skull shape is due to chance, so-called genetic drift, rather than natural selection. But some features of our faces, including the shape of our lower jaws, don’t seem to follow this random pattern.

A number of researchers have hypothesized that the advent of agriculture, which led to diets consisting of softer foods that required less chewing, led to modifications in the lower jaw, either through natural selection or from developmental changes caused by the way we use our jaws beginning in infancy. But evidence from ancient skeletons has been limited. To test the hypothesis, Noreen von Cramon-Taubadel, an anthropologist at the University of Kent in the United Kingdom, looked at skull and jaw shape in 11 populations, six of which live by farming and five of which are hunter-gatherers. The populations included people from Africa, Asia, Australia, Europe, and the Americas.

In the first part of her study, von Cramon-Taubadel measured the shapes of 322 crania and 295 jaws from museums, representing the 11 populations. She found a significant correlation between jaw shape and how each population made its living. Thus hunter-gatherers tended to have longer (more jutting) and narrower lower jaws, whereas those of farmers were relatively shorter and wider. But the form of the crania did not show this correlation, with one exception: The shape of the palate of the upper jaw, which is closely associated with the lower jaw and involved in chewing, also varied to some degree between farmers and hunter-gatherers.

To see whether this dichotomy in jaw shape between farmers and hunter-gatherers could be due to other factors, von Cramon-Taubadel searched for possible correlations with geographic location, genetic history, and climate variation but found little or none. In her report published online this week in the Proceedings of the National Academy of Sciences, she concludes that the transition to farming — which involved the domestication of plants and animals, a major increase in food processing, and thus consumption of easier to chew food — altered the shape of the human jaw, making it shorter and less robust. And this shortening of the jaw, she suggests, led to greater crowding of the teeth and the orthodontist bills that plague many modern families.

As for whether these changes in jaw shape are due to natural selection over many generations or simply changes that arise anew in each growing infant, von Cramon-Taubadel cites experimental studies showing that animals raised on softer, more processed foods grow smaller jaws than those fed fresh, unprocessed food. But even if the jaw alterations were due to natural selection, she concludes, they would have taken place over a relatively short period of evolutionary time.

The new paper “is a well-thought-out piece of research and an important contribution” to our understanding of how the shapes of our bodies reflect the way we live, says Katerina Harvati, an anthropologist at the University of Tübingen in Germany. “These findings confirm long-held ideas that the dietary shift to softer foods was an important influence affecting facial and dental morphology.” But Harvati cautions that the correlations between jaw shape and diet are not strong enough to completely rule out other factors, such as where people live. And Clark Larsen, an anthropologist at Ohio State University in Columbus, says that the study oversimplifies the differences between farming and hunting and gathering. Larsen notes that today many populations combine aspects of both and probably did in the prehistoric past.